Don’t be fooled by the tabloids. They like to pit women against each other, fabricate feuds and make out like it’s all a big competition (because clicks and engagement help them thrive!) The reality is, when you look closely, women are celebrating each other, supporting each other and uplifting each other all the time.

You see, both women are killing it when it comes to their music – Taylor’s ‘Anti-Hero’ had it’s eighth week at No. 1 on the Billboard 100 (her longest leading single in the top spot!)  and Sza’s ‘Kill Bill’ is second on the list this week while her album SOS topping the Billboard Global 200 chart for its fifth consecutive week.

In a message posted to her Insta stories, Taylor acknowledged the success of ‘Anti-Hero’ while also celebrating Sza:

“What on earth. I love you guys. Ps – Been listening to @Sza’s album nonstop. Absolutely adore her music. So much love and respect for her!!” 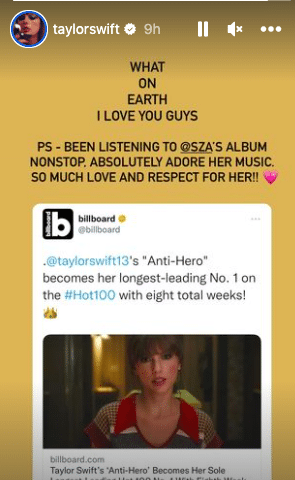 Sza wrote an equally lovely message on her own Instagram:

“Congratulations to Tay Tay! And thank you so much, your album and writing is phenomenal… as ALWAYS.” 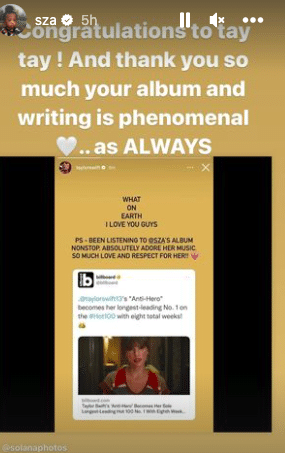 Of course, with both women having songs in the top spots on the Billboard charts, the tabloid machine has been in overdrive running stories about a feud between them and fans on both sides have been getting worked up about it.

“Uhh I feel silly that I even have to say this but I see supporters arguing and I hate that,” Sza posted on Twitter earlier.

“I don’t have beef w ANYONE, especially not Taylor lmao.”

Meryl Streep Will Appear in 'Only Murders in the Building' Season 3!