“The prospect isn’t a natural fit cos I REALLY like eating meat”  Patrick Brammall admits. But he’s giving it a go anyway. The Aussie actor is taking part in No Meat May along with Rebecca Gibney, Meshel Laurie, Chrissie Swan, Benjamin Law and thousands of other people around the world.

For 31 days, he’s swapping steaks, roasts and meat pies for vegetarian alternatives. And for the really committed participants, its a no to all animal products including dairy and eggs.

So why on earth is someone who loves eating meat, giving it up for an entire month?

I’ve been challenged by the folks at @no_meat_may to have a go at eating zero meat for 31 days. The prospect isn’t a natural fit, cos I REALLY like eating meat. Always have. But I can’t deny that there’s a tiny voice, somewhere in the sub-cockle region, that says “hey isn’t it a bit weird that heaps of animals live in shitty conditions to die early cos you like the taste?” So, in the hopes of shutting up that annoying little voice with its naive little question, I’m gonna try to eat consciously for a month. If you feel similarly, I invite you to join me. Check out the the @no_meat_may page for help. This is Walter. I sort of blame him for opening up my mind to this ethical dilemma. I don’t eat him. Much. #vegetarianforabit #nomeatmay🌿 #plantlyf #wheremyproteinat #donteatdog #ireckonfishismeattoo

For Patrick, it’s about making more conscious food choices. “I can’t deny that there’s a tiny voice, somewhere in the sub-cockle region that says, ‘hey isn’t it a bit weird that heaps of animals live in shitty conditions to die early cos you like the taste?”

For others, the challenge is about improving personal health or doing their bit to help the planet.

“Honestly I’d make a lousy vegan,” says Benjamin Law. “I come from a culture where it’s said we’ll eat anything with legs except tables. But even this idiot omnivore knows reducing meat and animal product consumption is important for ethical… environmental… health…and financial reasons.”

You see, by going veg for a month, each participant avoids consuming about 7 kilos of meat. That prevents approximately 134 pounds of carbon dioxide from being released into the atmosphere. And it saves countless animals. 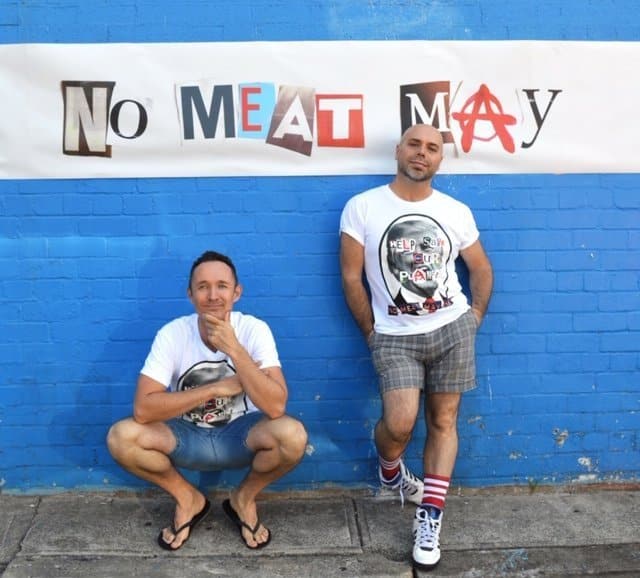 According to No Meat May co-founder, Ryan Alexander, if 20 percent of Aussies participated in the challenge, “they would collectively save over 80 million sea and land animals and almost 300, 000 tonnes of carbon dioxide in just that one month.”

We’re talking 5 million Aussies here. And with 2 million already identifying as either vegan or vegetarian, well, it does seem do-able.

“Food should be about fun, pleasure and nourishment,” says fellow co-founder Guy James Whitworth. “While our message is inherently serious, no one wants to be preached to, and we believe behavioural change should be an exciting adventure and a dabble with reinvention.”

He makes a good point there. How many of us meat-eaters have rolled our eyes at that person preaching their vegan lifestyle? That’s why this particular challenge is so great. It isn’t about giving up meat forever. It’s about avoiding it for a month, improving your health and the environment in the process and, if you want to tuck back into that steak on the first of June, you can.

Honestly I’d make a lousy vegan (I come from a culture where it’s said we’ll eat anything with legs except tables). But even this idiot omnivore knows reducing meat and animal product consumption is important for ethical (we don’t hug those animals to death), environmental (animal agriculture produces more greenhouse gases than the entire transport industry combined), health (red/processed meat is linked to heart disease, type 2 diabetes and bowel cancer) and financial (veggie-based diets tend to be cheaper) reasons. So this May, I’m going 100% meat-free for #NoMeatMay (@no_meat_may). We rarely cook meat at home nowadays, so I reckon it’ll be a piece of piss. I’ll post recipes in my Insta stories as we go along. Register and find out more: nomeatmay.net 🥕🥦🍅

Interestingly, a third of participants do find themselves swearing-off meat long term and 94 percent continue to reduce their meat consumption after the challenge is over.

This is Chrissie Swan‘s third year of No Meat May. She thinks everyone should give it a crack: “It’s one of my fave things to do because I get so CREATIVE with my food….And trust me, you DO make friends with salad!”

Patrick Brammall and Benjamin Law are up to day 15 out of 31. They’re still posting messages on social media so they’re still alive you guys. And maybe, just maybe, if self-confessed meat-lovers like those two can do it…we can too?

Check out No Meat May for more info.