“What a foolish word….Why would we define things that are incredible and awesome, things that actually make us believe in them more, with this pillar of antonymy?”

He suggests the use of “awe-inspiring, magnificent, prodigious and extraordinary” instead.

“Give incredible more credit,” you can almost hear him say in that charming Texan voice of his.

So here I am, giving incredible the credit it deserves:

Greenlights is the un-traditional memoir (or “playbook” as he calls it) by Academy Award winner, philanthropist and dad-of-three, Matthew McConaughey. And it truly is incredible, awe-inspiring, magnificent and extraordinary.

He wrote it over a 52-day self-imposed exile in the desert, with the help of 35 years worth of journals, photos, poems, notes and even bumper-stickers. And he tells it with such gusto and connection, it’s easy to forget you’ve never even met.

“I enjoyed myself more than I thought I would,” he amusingly comments, immediately conjuring up images of the Hollywood star, flicking through his memories with that dimpled grin and some thigh-slapping laughter in an empty room.

The guy has had a pretty wild 50 years on planet Earth to be honest, and if anyone else were telling it? Yeah, maybe it would seem unbelievable.

But this one comes straight from the depths of Matthew’s fascinating mind.

A mind that both writes poetry and agrees to a wrestling match with a stranger in rural Africa.

A mind that studied law before acting and can explain the fine difference between a “liar” and a “bullshitter” (the bullshitter lets you know he’s lying).

A mind that took him to Hollywood and found spiritual realignment in a monastery on the banks of the Chama River in Abiquiu, New Mexico.

And perhaps most importantly, a mind that savours the journey, no matter how rough it may be. 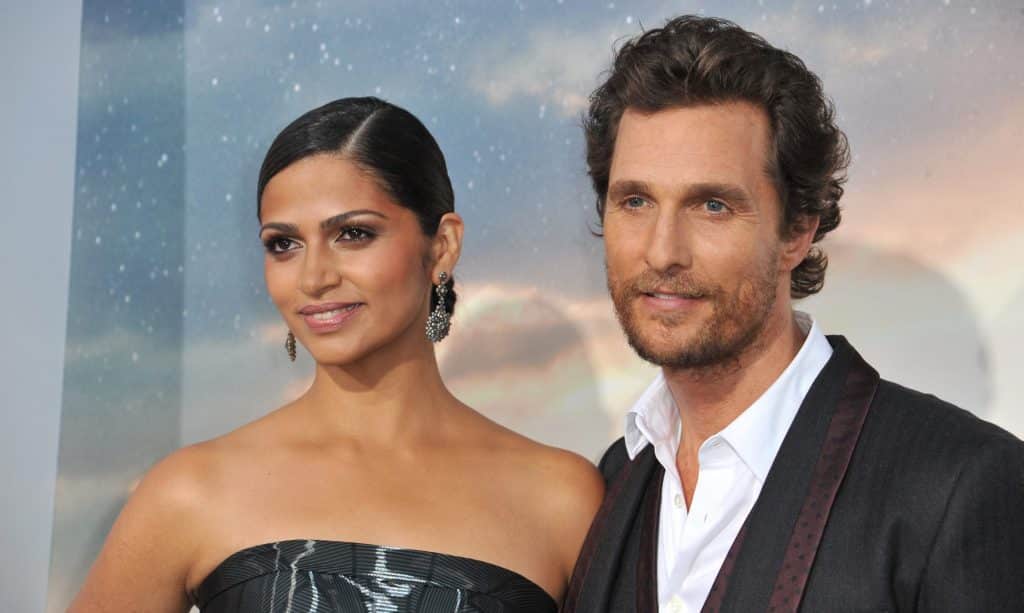 From page one, Matthew smashes any pre-conceived bio we may’ve had of him.

Sure, he’s still the easy-going, charismatic, fun-loving guy the media has told us about – and yes, he really was arrested while playing the bongoes naked – but it wasn’t all dimpled-smiles and good times.

That same fun-loving guy has had his fair share of darkness, challenges and pain.

He was blackmailed into sex at 15 and molested by a man at 18. He had a turbulent but loving family life where his parents were married three times and divorced twice, to each other. He lost his father as his acting career was shaping up and for awhile, had a strained relationship with his mother. There was a time when he said no to rom-coms and had no work coming in at all. And there was that year of exchange in rural Australia – which you’ll have to read yourself to believe.

As he so eloquently explains, everyone experiences “shit” in their life:  “I’ve just learned how to scrape it off my boots and carry on.”

And that is what Greenlights is all about: how to keep going no matter what life throws your way. No matter how many red or yellow lights may appear: They “eventually turn green, too,” he says.

Matthew McConaughey is the McConnoisseur of living life with ferocity and authenticity. He celebrates his adventures from Africa to the Amazon to his family home in Texas and acknowledges the struggles that have shaped who he is today.

We learn things we never knew (2005 People’s Sexiest Man Alive had horrible acne as a teenager) and things we didn’t know we wanted to know (his wet dreams get multiple mentions).

But perhaps the most engaging part of his book is seeing how Matthew loves.

No matter what, Matthew lives, breathes and works from a place of love and it’s easy to see why those green lights keep appearing.

I’d like to hope he’ll write another book when he’s 88, reflecting on the second half of his life. I have a feeling it’ll be full of more thigh-slapping laughter and adventure. But I also want to know about what Camila means to him as they grow old together and whether he’d ever pick a dead bird out of a toilet and give it mouth-to-mouth like his own dad did. I want to know about his Just Keep Livin’ Foundation and how that fulfils him. And I want to know if he’s still playing the bongoes in the middle of the night, naked.

Until then, buckle up.

This book is one helluva ride.

You can purchase Greenlights by Matthew McConaughey HERE.

And if you want the true McConaughey experience, I highly recommend the Greenlights audiobook, read by the man himself.

CHER VISITS "KAAVAN", THE ELEPHANT SHE HELPED FREE FROM THE ZOO