How awesome to see big names like Amy Schumer and Emily Ratajkowski getting amongst it on Capitol Hill today to protest Brett Kavanaugh – you know, the guy who is accused of sexually assaulting multiple women but may still end up sitting on the Supreme Court? Yeah, that guy.

Today I was arrested protesting the Supreme Court nomination of Brett Kavanaugh, a man who has been accused by multiple women of sexual assault. Men who hurt women can no longer be placed in positions of power. Kavanaugh’s confirmation as a Justice of the Supreme Court of the United States is a message to women in this country that they do not matter. I demand a government that acknowledges, respects and supports women as much as it does men.

The pair was among dozens of people arrested in the Hart Senate Office Building. Both were asked if they wanted to be arrested and both said yes – not sure why some people on social media are downplaying this. WHO CARES if they AGREED to it? The important thing is that they were making a point – they were standing up for women everywhere and especially for survivors of sexual assault. They were standing up to Brett Kavanaugh.

Amy was holding a sign that read “We believe Anita Hill” when she was arrested while Emily’s sign read,“Respect female existence or expect our resistance.” 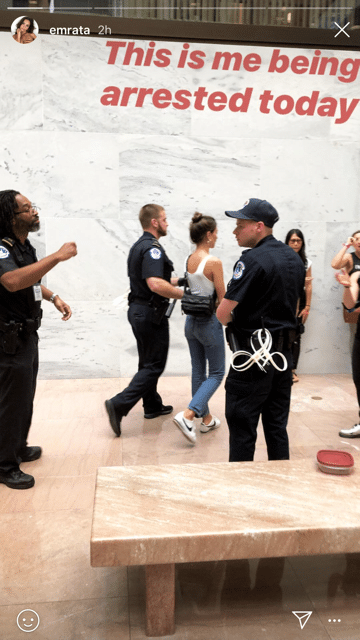 Earlier in the day, Amy and Emily took part in a #CancelKavanaugh protest outside the E. Barrett Prettyman Federal Courthouse and fellow celebs Lena Dunham and Whoopi Goldberg were there too.

What can I say? Keep doing your thing girls. The whole world is watching.

CelebrityKind Movies: A Star Is Born

“It’s such a betrayal to the citizens, the ver

NEW EPISODE: This week on the CelebrityKind podcas

Happy 7 years (plus a few days!) to @kristenannieb

“As the Dude would say, new sh** has come to lig

👀 Everything we know at the link in bio!

Congrats to @bethanyhamilton and Adam Dirks who ar