Note: Two of my favourite things are people who are making a positive difference in the world… and chocolate. So when I heard there was a chocolate making a difference in the world well, I HAD TO FIND OUT MORE…. This is the story of That Chocolate Movement and its inspiring founder Emma Bailie. Not an ad and not a sponsored post. Just a delicious, world-changing product I love and believe in. xxNehal

That Chocolate founder, Emma Bailie and her sponsor child Joshua in the Philippines, 2014.

In less than one year, That Chocolate has not only established itself as the new choc on the block but has also donated 10,000 meals to kids living in poverty. Inspired by brands like Thankyou and Who Gives A Crap?, founder Emma Bailie, got her foot in the door (or chocolate factory, I should say) after launching a Kickstarter campaign in 2017 and her story is well, pretty sweet.

That Chocolate is not your average chocolate bar. For starters, it’s healthy (so healthy, it’s stocked at the local F45 gym!) and it ticks every box you could possibly imagine (vegan, paleo, organic, dairy-free, nut-free, refined sugar-free, palm oil-free, emulsifier-free). But what makes it really stand out is, the profits from every 43g bar of chocolate sold goes to organisations providing meals for underprivileged children.

They’re focused on relieving hunger in the Philippines at the moment – the place where Emma first came up with the delicious concept. The 35-year-old from St Clair had been volunteering there in the aftermath of Super Typhoon Haiyan, just weeks after going through a relationship breakup and drowning her sorrows in “$15 tubs of ice-cream” (we’ve all been there, right?). “The contrast was disgusting,” Emma explains,“I saw kids eating out of bins…I saw kids dropping out of school to spend all day in the blistering heat scavenging at the toxic town dumpsite just to have a chance at putting a meal on the table.” 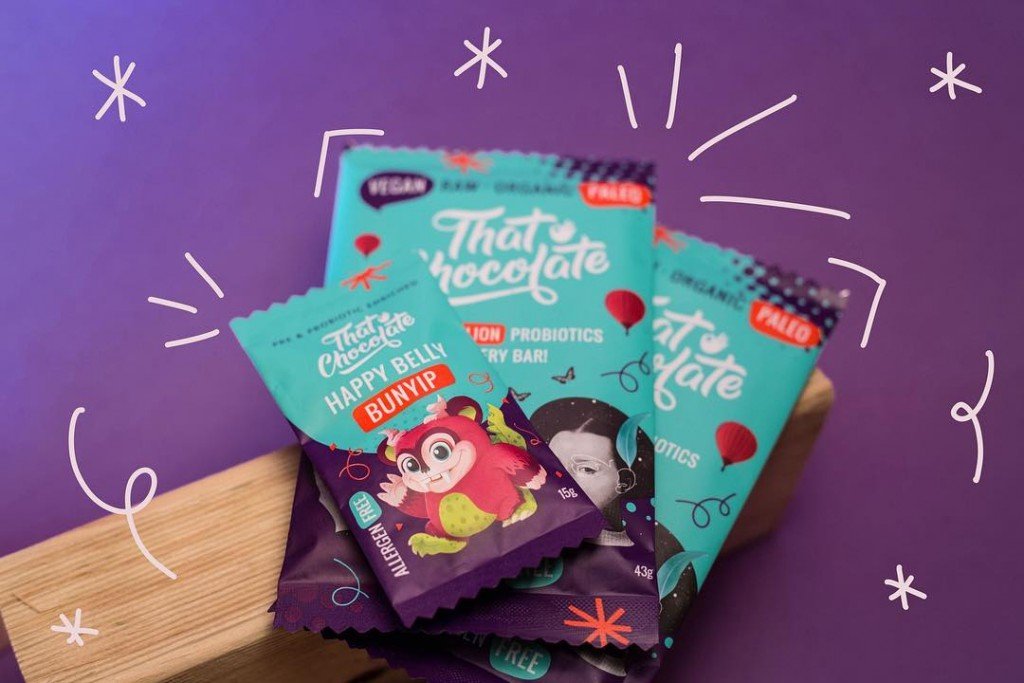 Some of the delicious products from That Chocolate.

It seems it was the combination of these two things that helped Emma find her purpose. “I felt guilty and privileged and that I needed to find a way to do something about it – something consistent and lasting, not just a donation of my money or time.” Fast forward to 2018, and less than one year after posting her mission on Kickstarter, That Chocolate is a thriving online business, is stocked in a number of shops throughout New South Wales and continues to provide thousands of meals for kids in poverty.

More than 3.1 million children die of hunger each year around the world and while fighting a problem so huge may seem an insurmountable task to most, Emma reckons it’s not that complicated. “It costs 50 to 60 cents to feed a child in these (Philippines) areas….it doesn’t take squillions of dollars to avoid these tragic statistics, it just takes humans giving a shit about other humans.”

And Emma certainly gives a shit. Like Daniel Flynn of the ThankYou brand who channels all profits into poverty stricken areas and maternal health programs in Nepal, Emma is taking mass consumption of the world’s favourite food and using it to fight global hunger. “I believe it is our responsibility to use our privilege to help our fellow humans who are suffering.” Pretty simple really.

So let’s get serious for a minute. How does That Chocolate stack up to other brands? As a serious daily consumer of the unhealthy variety of chocolate (I’m talking whole family blocks. In one sitting. By myself.) I can honestly tell you it’s delicious. Healthy chocolate usually tastes, let’s just say, a bit too healthy to me. But this. THIS, tastes like chocolate. There is a hint of saltiness in there and I’d say it’s closer to dark chocolate than milk, but it definitely satisfies that sweet craving.

Russell Crowe and John Oliver Help Save Koalas From Chlamydia

CelebrityKind Books: 'I Am Me' by Silvana Philippoussis