There really is no stopping Jane Fonda.

The Hollywood icon has been arrested for the fourth time in four weeks while raising awareness about the climate emergency.

Inspired by teenage climate activist Greta Thunberg, Jane has been taking part in Fire Drill Fridays – a weekly gathering outside the U.S Capitol building in Washington D.C to call for urgent government action.

This week, the group focused on all the ways women are leading climate solutions from organising strikes à la Greta to improving agricultural practices and running for office.

Today 45 people were arrested at #FireDrillFriday 🔥 . Climate change is a women’s issue! And women are at the heart of climate solutions. Around the world, women and girls are leading climate solutions, from stopping deforestation and improving agricultural practices to leading Climate Strikes and running for office as the kind of real climate leaders the world needs.

“These climate emergencies offer us a chance to choose between succumbing to the hatred that our President is spewing and turning on one another,” Fonda said to the crowd “or coming together in shared humanity and supporting each other. Let’s always choose love and empathy and our shared humanity.”

The 81-year-old was taking part in a sit-in with fellow actresses Rosanna Arquette and Catherine Keener inside the Hart Senate office building before being arrested. They were all charged with crowding or obstructing the area. 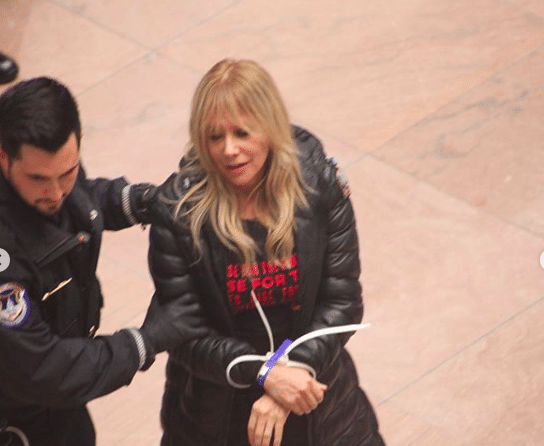 Last week, Ted Danson was arrested alongside Jane Fonda. The week before, it was her Grace & Frankie co-star Sam Waterston.

Can’t help but wonder, who will stand up for the Earth with Ms Fonda next week?

Leo Meets Greta and Calls Her 'A Leader of Our Time'

Can she be our friend too? 🥺 (via @brandonkgood

Happy birthday to the man with the voice, #JamesEa

Lunch was on @sussexroyal at @themissioncontinues,

It’s hard to believe this even needs to be said