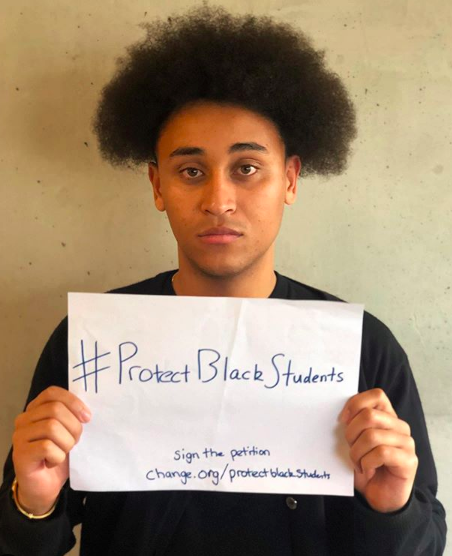 This week, people everywhere have been marking World Afro Day – a special day endorsed by the United Nations Human Rights Office which celebrates people with natural Afro hair and aims to end discrimination against them.

Heard it was #worldafroday today, so had to bring this back to the timeline… thank you @naivashaintl for this EPIC fro and thank u @makeupbyvera7 for caressing & moisturizing my legs. Oh how I long to have my legs caressed!

to Zuri, the star of Matthew A. Cherry’s Hair Love…

Yep, it’s all about empowering and uplifting people with Afros.

In fact the entire day was started by Michelle De Leon, a mum who just “wanted every little child of African descent to feel…good about their hair.”

And yet in private schools across Australia, kids aren’t allowed to sport Afros at all.

So Aussie rapper JamarzOnMarz, who was continually forced to shave his off at school, is doing something about it.

He’s started a petition calling on education ministers in each state and territory to make it illegal for uniform policies to discriminate against students with natural Afro hair “under the disguise of grooming codes and white professionalism.”

“These uniform policies promote inequality between students with Afro-textured hair and their peers who are afforded many more styling options,” JamarzOnMarz says in the petition giving crew cuts and undercuts among many examples.

“There are levels of self-expression Afro-diasporic students were and still are denied,” he continues.

“Furthermore, it is insulting, belittling, and dehumanising for institutes to use micro-aggressive racist terms like “extreme’, “unorthodox” and anything of the sort to describe the natural hair texture of Black students.”

The rapper says in addition to the Afro, protective styles including braids, cornrows and dreadlocks were also banned during his senior schooling years and he wants this “erasure of African culture” to end.

The petition has over 23,000 signatures to date.

So far, the New South Wales government has responded saying the Department of Education “rejects all forms of racism” and is “committed to the elimination of racial discrimination in public schools” but directed JamarzOnMarz to the NSW Attorney-General Mark Speakman instead to address the state’s Anti-Discrimination laws in regards to private school uniform codes.

The problem is that these same anti-discriminatory policies existed when JamarzOnMarz went to school and they did little for him.

He maintains the uniform codes, which also ban piercings and tattoos in private schools, are racist because “those are options. The texture of our hair is not.”

So what can you do to help?

And for Black current and former students, share your experience with restrictive uniform codes using the hashtag #ProtectBlackStudents.

Madonna to Direct and Co-Write Movie About Her Life

The Essay by Emily Ratajkowski You Need to Read Right Now