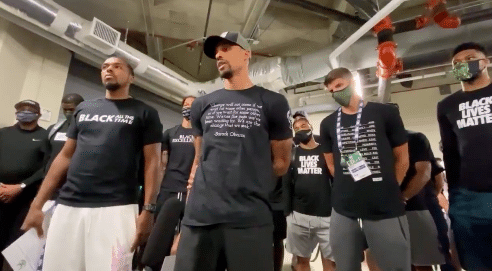 “Some things are bigger than basketball,” tweeted Alexander Lasry, Senior Vice-President of the Milwaukee Bucks moments after his players decided to boycott Game 5 of their playoff series against Orlando Magic.

The team is demanding justice for Jacob Blake, a Black man who was shot in the back seven times by a police officer in Kenosha this week.

“The past four months have shed a light on the ongoing racial injustices facing our African American communities,” the team said in a statement, referring to the countless deaths of Black Americans including Breonna Taylor and George Floyd at the hands of police.

“Despite the overwhelming plea for change, there has been no action, so our focus today cannot be on basketball,” they continued.

“When we take the court and represent Milwaukee and Wisconsin, we are expected to play at a high level, give maximum effort and hold each other accountable.  We hold ourselves to that standard, and in this moment we are demanding the same from our lawmakers and law enforcement.”

And the owners of the team fully support their move:

“Although we did not know beforehand, we would have wholeheartedly agreed with them. The only way to bring about change is to shine a light on the racial injustices that are happening in front of us.”

They’re not the only ones protesting.

Reps for the Orlando Magic have issued a statement saying they stand united with the “Milwaukee Bucks and the rest of the league in condemning bigotry, racial injustice and unwarranted use of violence by police against people of colour.”

Atlanta Dream player Elizabeth Williams announced that WNBA teams are also standing in solidarity with “our brothers in the NBA” and will boycott their games.

The Washington Mystics arrived on court with seven bullet holes painted on the back of their T-shirts, before announcing they too would be boycotting.

Never thought I would paint bullet holes on the back of a T-shirt. 7 gunshots in the back. This happened to a human being in real life. A Black Man. How many more? #BlackLivesMatter pic.twitter.com/6wtjez0aOa

And LeBron James posted this tweet after news of Jacob Blake’s shooting spread across the world:

FUCK THIS MAN!!!! WE DEMAND CHANGE. SICK OF IT

Some things are bigger than basketball.

LeBron James is Housing Homeless Students at His "I Promise Village"