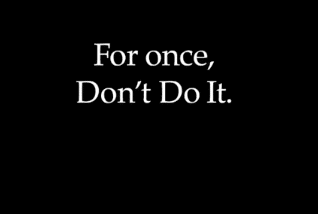 Nike releases “Don’t Do It” ad to combat racism.

They’re usually telling us to Just Do It. But Nike has a different message for America and the world right now:

The athletic brand has released a new ad in the wake of the killing of African American man George Floyd, urging viewers to take a stand against racism.

“Don’t turn your back on racism.

Don’t accept innocent lives being taken from us.

Don’t think this doesn’t affect you.

Don’t sit back and be silent.”

Let’s all be part of the change. ⠀ ⠀ #UntilWeAllWin

This isn’t the first time Nike has refused to stay silent on the issue of racism and police brutality.

In 2018, the brand released a campaign featuring former NFL player Colin Kaepernick who kneeled during the American national anthem to highlight racial inequality in America.

Halsey and Yungblud are Helping Injured Protestors in Los Angeles

You know... @kimkardashian has 4 kids, runs a real

Where’s the squeal emoji??? This doco is going t

Firstly...happy birthday to singer and philanthrop

“So much of the abuse I endured would have been