Rihanna is reaching out to her millions of followers today, urging them to take note of the atrocities happening in Sudan.

What’s going on there exactly? Well, back in April, Sudanese President Omar al-Bashir was thrown out of power. Civilians are protesting the military that’s taken over. Through news reports and social media, we know many of them are being met with unimaginable acts of violence.

And with an internet blackout going on too preventing protestors from communicating with the world, Rihanna‘s post is an important one. She’s not only making sure we are all aware of what’s going on but also letting the people of Sudan know the world does care.

The singer posted these words on her Insta stories: “They’re shooting people’s houses, raping women, burning bodies, throwing them in the Nile like vermin, tormenting people, urinating on them, making them drink sewerage water, terrorising the streets and stopping Muslims from going to Eid prayer. There is an internet blackout! Please share. Raise awareness.” 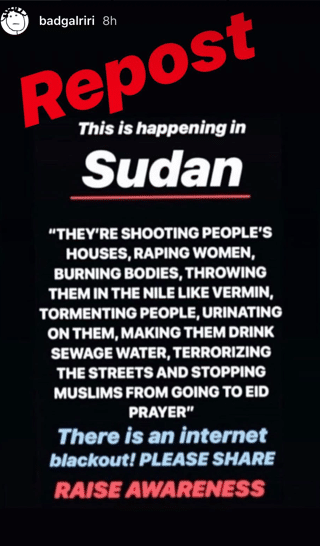 Similarly, Somali-American model Halima Aden has changed her profile picture to blue in solidarity with, as she puts it, “a nation that is currently bleeding.”: 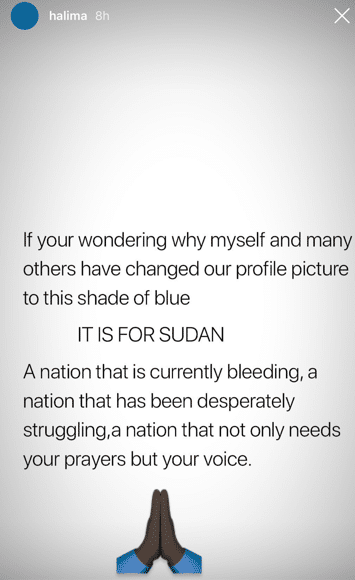 If you’d like to learn more about the crisis in Sudan, you can read this article from Amnesty International.