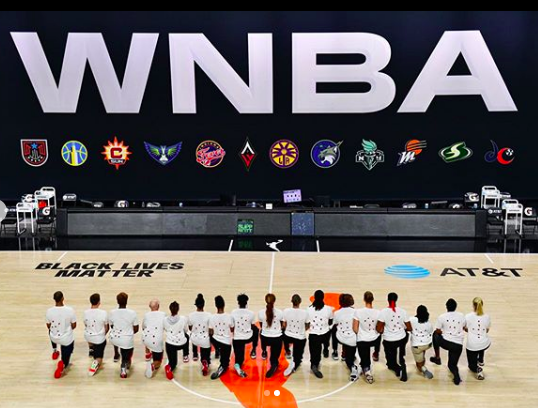 WNBA teams are joining others in sport in boycotting their matches and demanding justice for the countless Black lives lost at the hands of police brutality.

All three games which were supposed to be played on Wednesday night in the U.S. have been postponed including the match between the Atlanta Dream and defending WNBA champion Washington Mystics.

In a visually powerful move, the Mystics arrived on court wearing white T-shirts with seven bullet holes painted on the back in reference to Jacob Blake, a Black man who was shot in the back seven times by police in Kenosha this week.

Never thought I would paint bullet holes on the back of a T-shirt. 7 gunshots in the back. This happened to a human being in real life. A Black Man. How many more? #BlackLivesMatter pic.twitter.com/6wtjez0aOa

On the front, they wrote the letters of his name:

“We aren’t just basketball players….we need to understand that when most of us go home, we still are Black,” Mystics guard Ariel Atkins tells ESPN.

The Dream’s Elizabeth Williams also made a statement to ESPN on behalf of all WNBA players: “What we have seen over the last few months, and most recently with the brutal police shooting of Jacob Blake, is overwhelming. And while we hurt for Jacob and his community, we also have an opportunity to keep the focus on the issues and demand change.”

Center @E_Williams_1 reads statement on @espn as the representative for all @WNBA players. Tonight’s games have been cancelled. pic.twitter.com/xDz4uCQSiD

A number of WNBA players have been wearing Breonna Taylor’s name on the backs of their jerseys during the season too. Breonna was shot dead while sleeping in her bed in Louisville Kentucky, after police carried out a no-knock warrant at the wrong address.