Billie Eilish has apologised after a video went viral on social media this week showing her mouthing Tyler the Creator’s 2011 song “Fish” which includes a racial slur.

In a message posted to her Insta stories, the 19-year-old superstar says that she wanted to address the issue “because I’m being labelled something that I am not.”

She begins by explaining that she was 13 or 14 when she mouthed the offensive words from the song which, at the time, she “didn’t know was a derogatory term used against members of the Asian community.”

“I am appalled and embarrassed and want to barf that I ever mouthed along to that word,” she continues and admits “regardless of the ignorance and age at the time, nothing excuses the fact that it was hurtful. And for that I am sorry.” 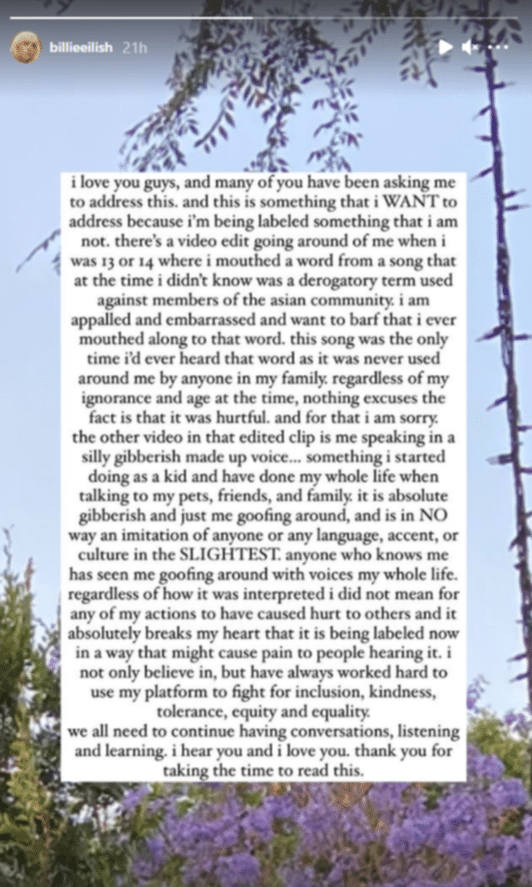 Billie used the opportunity to also address another resurfaced video where she’s putting on a random accent because some Tik Tok users thought she was mocking Asian people in that one too.

But Billie explains she was just speaking in “a silly gibberish, made up voice” that was in “NO way imitation of anyone or any language, accent or culture in the SLIGHTEST.”

She adds, “Anyone who knows me, has seen me goofing around with voices my whole life.”

The Grammy award-winning singer still apologised though for causing hurt to others.

“I not only believe in, but have always worked hard to use my platform to fight for inclusion, kindness, tolerance, equity and equality.”

Brave Britney Spears Asks For End to Her Conservatorship: "I Deserve to Have a Life"