It was the middle of the pandemic in 2020, when nurse-turned-teacher-turned-actress Shalet Monique took her first stunt class.  She had been searching for ways to keep busy and up-skill with COVID-19 shutting down sets across the U.S. In that first session, she learned how to hold weapons and perform basic moves on camera. Two years on, she’s forging a path in an industry dominated by men – and very few women of colour – scoring gigs on stunt teams for Marvel’s Black Panther: Wakanda Forever as well as HBO’s We Own This City.

Shalet tells CelebrityKind about her unconventional path into the entertainment world and how keeping faith during a challenging time, opened doors she never imagined walking through…

1. You had never taken part in a school play or performed in front of anyone until you booked your first job! What convinced you to turn to acting?

Shalet: I always laugh about this. When I told my dad that I was going to be an actress he was so confused! “Since when do you want to be an actress? I couldn’t even get you to be in a school play!”

To answer your question and to be completely transparent, I felt like I was down to nothing when this seed/dream was planted inside of me. I was in my first year of teaching and got laid off along with over 40 other teachers in my school district because of huge budget cuts. At the time I was saving up to attend my graduation ceremony for my masters degree and had an unexpected family emergency that left me with $100 to my name, so I couldn’t afford to attend my graduation.

In the midst of my storm, my sister invited me to church. Jamal Bryant, her pastor from Baltimore, was coming to our home church, Bethany Baptist in New Jersey. I remember just needing to do something to keep my mind off of life and its constant disappointments. I was mentally exhausted. I remember Jamal Bryant saying that his message was for someone in the church who is tired of trying. He read a poem called Trying is Killing Me by Najwah Essop. At this point I was ALL EARS! I’m like, me! I’m the someone in the church that you’re talking to. 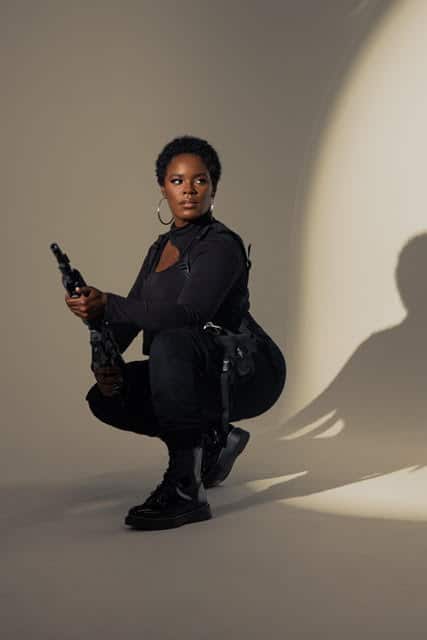 He went on to preach “that degree that you thought you were going to use, you won’t be using it. God is going to do something no one in your family has ever attempted before and it was going to happen with supernatural success.” Now I really felt SEEN!

Long story short, I always thought giving $1 was more than enough to sow into church but God told me to sow my last. I almost wanted to fake like I put the money in the offering tray but I felt compelled to really sow my last. So I sowed my last $100 believing by faith that God had something bigger for me. The following week I was at an audition for a role in a movie. I can’t even begin to explain how this happened but what I do know is that I didn’t book the role. So I’m like, okay God, that wasn’t it.  But the director remembered me and called me back for an opportunity to play a role as a news reporter in a TV series that he was working on which is currently being played on Tubi. It was unbelievable and I am forever grateful for him!

I never thought that l would be an actress. My next role was in a short film called Somethin’ In The Water that went on to win the Newark International film festival for best short film shot in 24 hours. Not only did I play one of the lead actors, it was also my first fight scene on camera! Let’s talk about just going for it! The director was amazing. He really coached me through everything. I believe that my role in Somethin’ In The Water was low-key the start of my stunt career and I didn’t even know it yet. (Thank you Nimi!) He had me rolling down the streets of Newark in flip flops and a head scarf! To sum this all up—faith changed my life and had me walking through doors that I never thought I had keys to.

2. Can you tell us what that first day on set was like for you?

Shalet: Having a degree in education and really loving to learn had me feeling like the first day of school minus the fresh first day of school outfit— I was very much dressed  in character! I was so nervous but even more excited to see and feel something so new! It felt like life restarted again. There was so much happening around me. I wanted to know about everything so I was anxious but at the same time I really had a sense of peace over me like that clear crisp whisper – you can really do this Shalet. You’re operating in your purpose and you’ve prepared yourself for this.

3. You’ve switched careers several times and seems you’ve ultimately followed your heart into the entertainment world – what advice do you have for others who might be worried about taking that step and making that change?

Shalet: I definitely feel like I’m following my heart and believing in all of its promises. So the first thing I would say is that when God plants a seed or promise in your heart, believe it wholeheartedly. It has no choice but to manifest. Do *ish scared!!! Yes it’s scary but the reward is a feeling that you can’t even begin to explain. Be honest with yourself about your worries then accept the fact that they are your worries and your worries alone. God’s not worried, he has a perfect plan for you and the only thing that can stop you is you. Be okay with not knowing where the road will take you, just know that faith will take you to places that you couldn’t even begin to dream of.

4. What is your average day like as a member of the stunt team on Wakanda Forever?

Shalet: My time on set was UNFORGETTABLE! Like I would love to say pinch me so that I can wake up but that would be corny! Nah, imma be corny! Pinch meeeee so I can wake uppppp!  The love on the set was so evident and transparent. It was really a labour of love. It was intimate and just an experience that I can’t even summarise. The stunt crew that I worked with were just amazing. It felt like everyone was fighting to tell the best story that they could possibly tell. There was nothing average about the days on set. This experience was truly a dream come true.

5. As an Afro-Cuban woman, when was the first time you felt represented on screen (if ever)?

Shalet: I honestly can’t say that I’ve felt represented as an Afro-Cuban woman on screen yet. However, what I can say is that I am excited to follow behind some of the many well-respected and amazingly talented Afro-Latina actresses who paved the way with their beautifully melanated skin, boundless strength and determination to be successful in a business that doesn’t always welcome them past their stereotypes. Me sientes?