Seven years ago, Rafael Castillo took his first acting class – and it changed his life.

The Dominican-American actor, who’s making waves as menacing thug Dante in the hit Netflix series Mo (starring Mo Amer), was meant to be a pro-athlete. He’d been excelling at college football but when he realised this wasn’t the path that made him happy, he turned to acting and as he puts it, “fell in love.”

It seems following his heart was certainly the right move. Within a year of training, Rafael found himself working alongside Hollywood legend Burt Reynolds in Miami Love Affair and soon after, landed recurring roles on The Quad and Black Lightning – an impressive feat for a newcomer to the industry. And there’s no slowing him down. He has four projects coming out in 2023 including Cinnamon with Damon Wayans and Praise This with Tristan Mack Wilds.

Rafael tells us about his switch to acting, his hopes of seeing more Afro-Latino representation on screen and the thrill of portraying a character like Dante:

1. At what point did you decide to pursue a career in acting?

Rafael: December 15th, 2015 was the first time I ever took an acting class. But the entire year was a battle. I had just come home from playing college ball and kinda fell into a deep depression when I realised everything I had worked for just ended like that. All until my best friend told me that there was this acting school that gave you your first class free. He asked if I wanted to go with him because he was interested in pursuing it, I went along and man… I fell in love that day.

2. Your character Dante in Netflix’s ‘Mo’ has caused quite a stir! How did you prepare for the role?

Rafael: Lol Thank you! It was such a fun role to play! Honestly, the type of character isn’t far from the type I play most often so it is kind of a comfort zone for me in terms of performing. What I had to learn or rather got to learn in preparing (big thanks to coach Lesly Kahn) and playing that role is how to find the comedy in certain moments. Though this wasn’t the first thug I’ve played, it was one of my first comedies. So it was a lot about finding the comedic technicals, and understanding what the writers were trying to convey, but then getting to set and throwing all that away because you are face-to-face with a performer like Mo Amer who is 90% improv and so good at it. So you have to play, and be open to whatever is thrown your way. And the hardest part? NOT BREAKING! This was for sure one of the funnest roles I’ve gotten to play in my career so far. I really hope I get to see myself in more comedies. 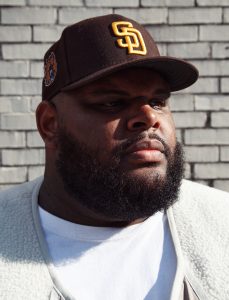 3. While Afro-Latino representation on screen is growing, we still have a long way to go. When was the first time, if ever, you’ve felt represented on screen?

Rafael: It was performers like Laz Alonso and Melissa De Sosa, who I actually got to work with in Black Lightning! As far back as I can remember they’d play Latinos on shows that I watched growing up. Like I remember Laz playing Manny on One on One, and saying, ‘I know that person’, and ‘he could be in my family’. It wasn’t often, but when I saw a character like that it was also cool, because I could really relate for the first time. I’m glad the trend is changing. I have yet to be able to represent my people on screen, but I look forward to the day that I can. Latinos come in all shades/colours. It’s time the world learns that.