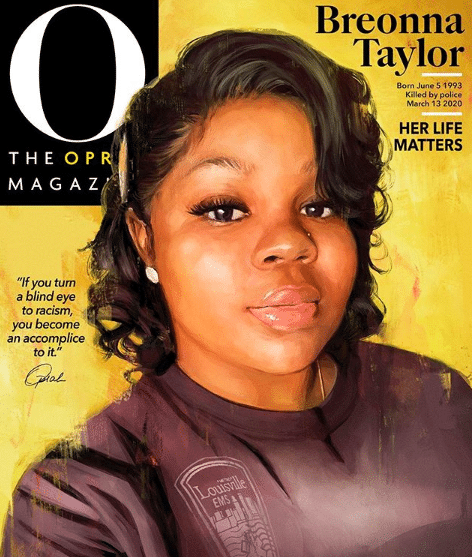 For 20 years, Oprah Winfrey has graced the covers of O Magazine, but the upcoming September issue won’t feature the media queen.

Instead, we’ll see the face of 26-year-old Breonna Taylor who was shot dead while sleeping in her home in Louisville, Kentucky after police carried out a no-knock warrant at the wrong address.

“What I know for sure: We can’t be silent,” Ms Winfrey writes in a powerful and heart-wrenching column for the magazine.

For the first time in 20 years, @oprah has given up her O Magazine cover to honor Breonna Taylor. She says, “Breonna Taylor. She was just like you. And like everyone who dies unexpectedly, she had plans. Plans for a future filled with responsibility and work and friends and laughter. Imagine if three unidentified men burst into your home while you were sleeping. And your partner fired a gun to protect you. And then mayhem. What I know for sure: We can’t be silent. We have to use whatever megaphone we have to cry for justice. And that is why Breonna Taylor is on the cover of O magazine. I cry for justice in her name.” Tap the link in our bio to read more about Oprah’s tribute to Breonna—and her recent conversation with her mother, Tamika Palmer. Breonna: This one’s for you 🙏🏽 The September issue will be available wherever you buy or download your magazines on 8/11. (🎨: @alexis_art)

Ms Winfrey’s column also describes a conversation she recently had with Breonna’s mother, Tamika Palmer who says she misses her daughter’s smile: “It’s what I miss most about her. I still can’t grasp the concept of her being gone. It feels so surreal. I’m still waiting for her to come through the door.”

Every page of the issue will describe actions readers can take to not only fight systemic racism but also demand justice for Breonna Taylor whose killers have still not been charged.

The magazine also features a silhouette of Breonna created by Janelle Washington with 89 names from the African American Policy Forum’s #SayHerName campaign, which raises awareness about police brutality against Black women.

The September issue will be available from August 11.

Ryan Reynolds Shares Thanks After Stolen Teddy Returned to Owner!