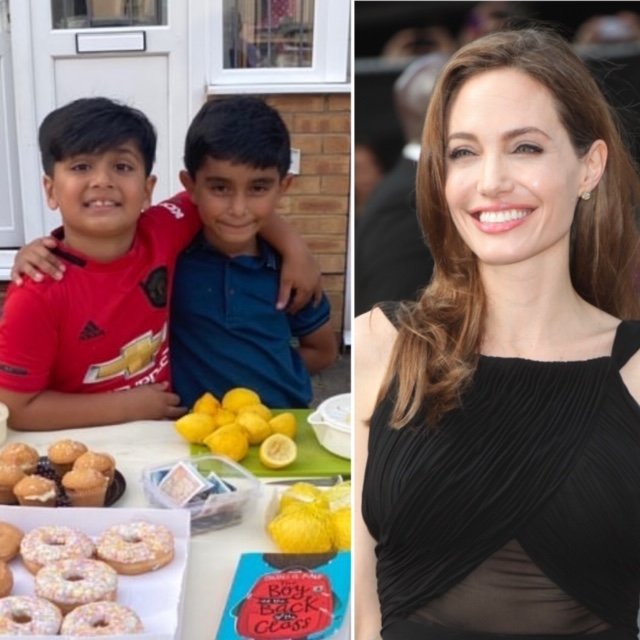 Two best friends who started a lemonade stand to raise money for the children of Yemen have received a surprise donation from Hollywood star Angelina Jolie.

6-year-olds Ayaan Moosa and Mikaeel Ishaaq – who call themselves the “Lemonaid Boys” – began selling cool drinks and cupcakes to family, friends and neighbours on their street in East London a few months ago, after seeing devastating footage of the crisis in Yemen.

They hoped to raise a few hundred pounds but in their first few weeks managed to raise £5,000 (or AU$8,800) and made local headlines.

Soon enough, their “Lemon-aid for Yemen-aid” stand caught Angelina’s attention who sent them an undisclosed donation and a special note:

“Thank you for what you and your friends are doing to help children in Yemen. I’m sorry I’m not able to buy a lemonade from you, but I’d still like to make a donation to your stand. Love, Angelina.”

And it seems Angelina’s star power certainly helped. In an Instagram post, the boys’ parents say she “has helped us raise so much awareness towards the crisis in Yemen than we ever thought was possible when we first started.”

The money raised is used by non-profit organisation One Nation UK to buy and distribute food and clean water for the people of Yemen.

Thank you for these pictures @onenationuk We can’t quite believe how many children and families we’ve managed to support thanks to all the donations we’ve received across the world including from #angelinajolie These pictures only show you a fraction of the aid we’ve sent to Yemen and we plan on sending tons more! We promise that we won’t stop until the world stops and takes notice 🙏🏽💙💙 #yemencantwait #yemen #yemencrisis #humanity #lemonaid #lemonaidboys #yemenappeal #onenation #teamyemen

Angelina has been speaking up about the crisis in Yemen for many years now.

The Hollywood star who is also a UNHCR Special Envoy has been urging the international community to take action to put an end to the extreme level of human suffering in the country and in 2018 called for the urgent establishment of a ceasefire.

“As an international community we have been shamefully slow to act to end the crisis in Yemen. We have watched the situation deteriorate to the point that Yemen is now on the brink of man-made famine and facing the worst cholera epidemic in the world in decades,” she said at the time.

According to the UNHCR, 4 out of 5 Yemenis (over 24 million people) are currently in need of some form of humanitarian assistance.

If you’d like to learn more about the Lemonaid Boys or make a donation to their stand, you can do so HERE.

*Disclaimer: The material and information contained on this page is for general and entertainment purposes only. Any claim, statistic, quote or other representation about a product, service, company, foundation or fundraiser should be verified with the manufacturer, provider, company or party in question.