“Every 5 hours someone is diagnosed with brain cancer and 8 out of 10 people who are diagnosed, will die from brain cancer. Everyone thinks it’s this rare form of cancer, it is not. It kills more people under 40…than any other cancer. It kills more kids than any other disease. In 2010, my husband Greg was one of the unlucky ones. And after a long, long, long, long battle, he died from brain cancer. Over 10 years I watched him suffer multiple seizures a day, lose feeling down one side of his body. Have his little 3-year-old push him around in a wheelchair because he couldn’t walk anymore. ….No one should have to go through that.” – Carrie Bickmore at the 2015 Logie Awards. 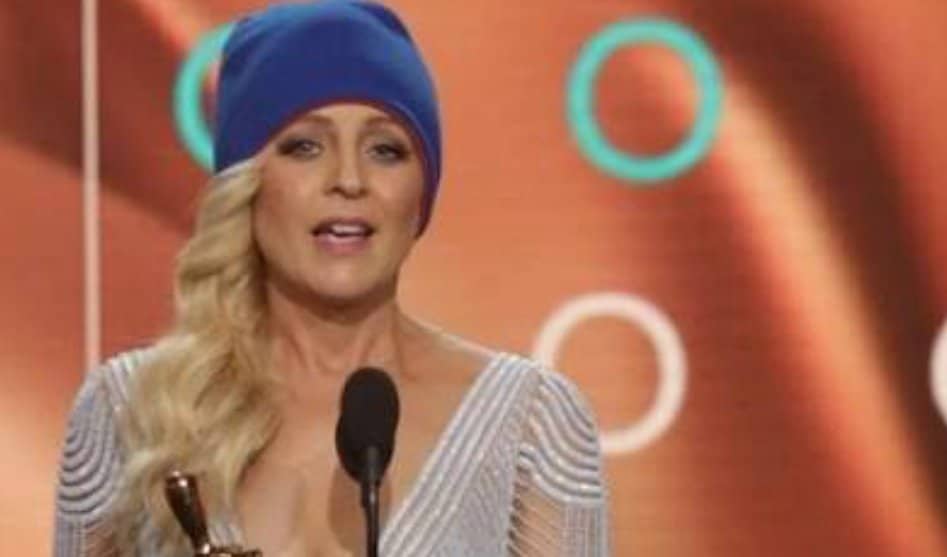 It’s been almost 3 years since Carrie Bickmore put on that blue beanie at the Logies and used her 2 and a half minutes on stage to raise awareness about brain cancer. She said at the time, that she wanted to get Australia talking about this disease that kills so many yet gets so little funding. And boy did she get us talking.

The next day, the glamorous TV host was on the cover of every paper wearing that special blue beanie. For the first time, brain cancer was making headlines. Everyone on TV was talking about it. Everyone on radio was too. Most importantly perhaps, the Australian government started talking about it. In October last year, the Federal Government announced a $100 million plan (the Australian Brain Cancer Mission) to double brain cancer survival rates over the next 10 years.

Today is the start of brain cancer awareness month and the launch of Carrie’s Beanies 4 Brain Cancer. 3 years on from that special Logies moment, Carrie hasn’t stopped using her various radio, TV and social media platforms to keep the issue in the spotlight.

Her organisation has raised $4.5 million to date by selling beanies – something her late husband Greg always wanted to wear to hide his surgical scars – and this year, Carrie’s Beanies 4 Brain Cancer is hoping to raise a further $5 million for cancer research. Sounds like a lot of money, right? But as Carrie says time and time again, it’s just  “a drop in the ocean” of what’s really needed to find a cure.

You see, every 5 hours, someone is still being diagnosed with brain cancer in Australia. And it’s still killing more people under 40 than any other cancer. It’s still killing more kids in Australia than any other disease. It’s still mostly a 1-year survival rate with only 2 in 10 people living at least 5 years. This horrifically low rate has not changed for decades. DECADES. Because there hasn’t been enough funding for research. While other forms of cancers have had drastic improvements in survival rates over the last 30 years, brain cancer has been largely ignored.

Now, with the creation of the Australian Brain Cancer Mission which brings together funding from the government, philanthropists and organisations like Carrie’s Beanies, there will be more opportunities for research than ever before.  The mission is also aiming to give every adult and child affected by brain cancer the chance to participate in clinical trials.

If you’d like to stay warm this winter and support brain cancer research, you can get your beanie (complete with pom pom!) HERE.