23 musicians and artists taking the stage including Queen with Adam Lambert, Alice Cooper, 5 Seconds of Summer, K.D Lang and Delta Goodrem. Messages of hope and positivity from much loved Aussies like Olivia Newton-John and those we claim as our own Russell Crowe (sorry New Zealand). 70,000 people rocking on at Sydney Olympic Park. And millions more watching the broadcast all over the world.

It’s the epic event happening right now to raise funds for the communities devastated by the bushfires across our country, and the emergency services who’ve been working around the clock to support them.

Fire Fight Australia is aiming to raise over $10 million through ticket and merchandise sales as well as online donations by the end of the night. (The tally is just over $6.5 million at the time of writing.)

Comedian Celeste Barber, who is hosting the event, made an important point at the start of the show saying,”as Aussies, we bear together and look after each other – because it turns out the people at the top don’t.”

Whether you agree with her words or not, one thing is clear. There’s certainly a whole lot of love for Australia tonight.

Check out some of the photos from the concert below:

Wow! Thank you for all who came to the show today and all who watched at home!! Thanks for supporting this great cause. #firefightaustralia 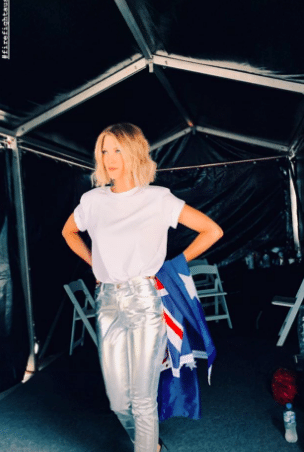 Delta Goodrem about to take the stage at Fire Fight Australia 2020 (Photo: @deltagoodrem/Instagram)

Fuck i love Australia. Absolutely love it. $6.5m and counting today! The Aussie spirit is alive and well. @firefightaustralia

Chris Hemsworth Gets on Board with SurFebruary to Wipe Out Cancer