Gigi Hadid and Halima Aden are both cover girls for the September issue of CR Fashion Book (photographed by Pieter Hugo) and LOOK: they’re both wearing UNICEF tees! In fact, the entire issue is dedicated to raising awareness about the global refugee crisis and how everyone – supermodels, activists, you and me – can help change the world. 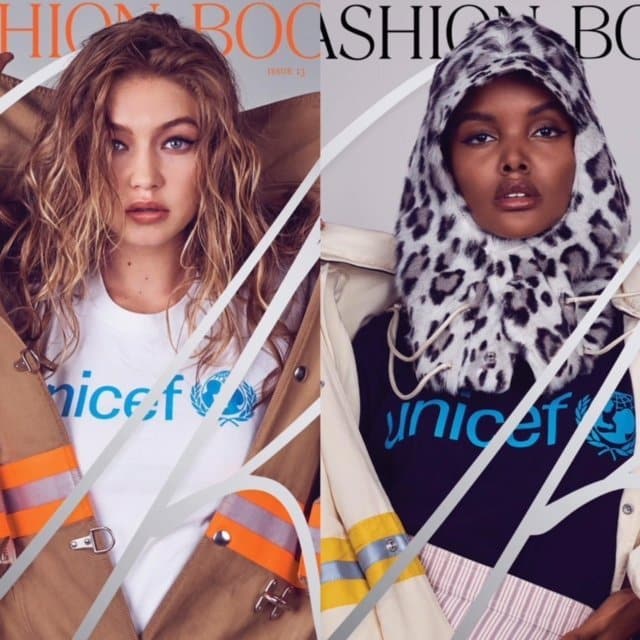 And Carine Roitfeld couldn’t have picked better models for the cover. Both Gigi and Halima are UNICEF ambassadors and have their own stories to tell when it comes to refugees.

“I was born in a refugee camp in Kenya, it was a UN camp,” explains Halima in a video for CR Fashion Book. “So I remember seeing UNICEF. I remember seeing the staff.” Halima was 6-years-old when she moved to the US (and eventually started smashing goals as the first hijab-wearing model to sign on to a major modelling agency!)

@gigihadid a young lady to be proud of. And that my daughter. And I wish thousands of young ladies would take her lead .. and help. @unicef #unicefusa @gigihadid

Meanwhile, Gigi is the daughter of a refugee – her dad Mohamed Hadid writes he was “only about 18 months old. After we were expelled from our beloved Palestine into the Syrian refugee camps.” It wasn’t until Mohamed was a teenager that his family would make it to America.

I was only about 18 month old. After we were expelled from our beloved #Palastine into the Syrian refugee camps .. My dad got a brief job at the university of Damascus in #Syria .. This was our family pictures for a Palastinian Refugee Card. The Hadid Family, my beautiful mother Kharia Daher Hadid. My father Anwar Mohamed Hadid. My sisters Ghada,Raida, Sana, and me. Thank you #Syria for taking us in. And thank you America for allowing All of us to realize our dreams …

Gigi and Halima have also started a crowd funding campaign to coincide with this special September cover. They’re urging their MILLIONS of fans to help #childrenuprooted by ongoing conflicts and natural disasters. For more info or to donate, you can go HERE.