There’s this blue bandana Harry Styles once wore and it’s turned out to be so much more than a statement accessory.

It’s giving comfort and hope to a young One Direction fan named Angelee, who’s in a hospital bed in Queensland right now: 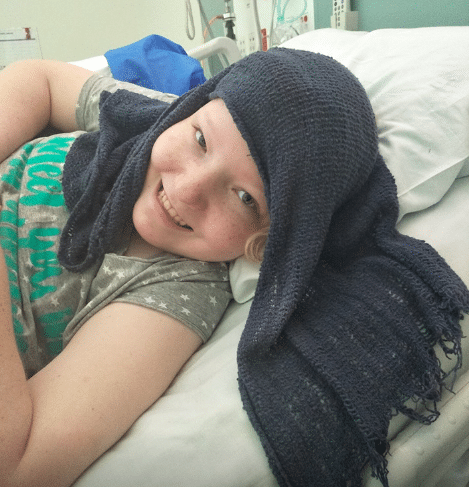 Angelee with her Harry Styles bandana (Photo: posted with permission from @AngeleesQuest/Facebook)

Angelee, who’s living with Spina Bifida, was all smiles when she received the bandana in the post recently. It was sent to her by another One Direction fan, Neala who battled cancer just a few years earlier.

In 2014,  Neala was sick with leukaemia and was losing all her hair. A family friend who wanted to do something kind and uplifting for her, tracked down the bandana (worn and unwashed, as requested!) with the help of Aussie entertainment reporter Richard Wilkins and Sony Music Australia.

Neala who is now 20 years old, healthy and studying to be a nurse, heard about Angelee‘s struggles and didn’t think twice about sending over the item that gave her so much comfort just a few years ago.

“The bandana gave Neala a gorgeous lift during her darkest time,” writes Emma Grey, the beautiful soul who was behind the surprise. She’s endearingly calling the whole thing “the sisterhood of the travelling Styles’ bandana.”

Family and friends of both Neala and Angelee are hoping Harry Styles might come across this story and get in touch with the girls. Can you help share the message?