Prince Harry and Duchess Meghan’s Archewell Foundation has helped build a new playground in Uvalde, Texas to bring hope and healing to families impacted by the school shooting at Robb Elementary earlier this year.

Their organisation teamed up with the City of Uvalde and nonprofit KABOOM!, to build a vibrant community playspace at DeLeon Park, four blocks away from the school. It was designed with input from local kids who said they’d like to see slides, swings, merry-go-rounds and tetherballs in their “dream playground.”

“It has been an honour to support the children and families in Uvalde design and build this amazing space where the community can come together,” James Holt, Executive Director of Archewell says in a statement. 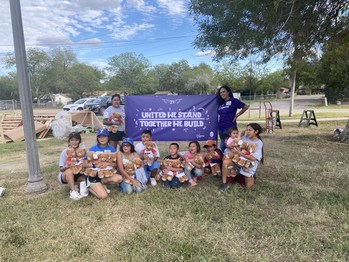 “Our hope is that this special project can help the community heal and be home to imagination, games and play for many years to come.”

Uvalde Mayor Don McLaughlin says the DeLeon Park project has given community members a sense of purpose after the heavy loss of 21 lives: “Coming together to build the new playground at DeLeon Park has given community members a way to unite around something positive as they try to heal. We are grateful for the rallying of support from KABOOM!, Archewell and others who are committed to the long-term health and well-being of the kids and families in Uvalde.” 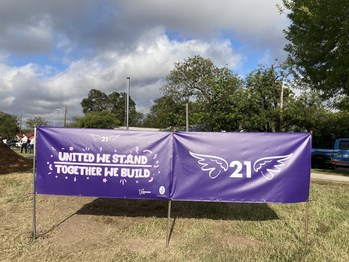 Memorial Banner for the 19 students and two teachers who lost their lives at Robb Elementary. (Credit: KABOOM!)

Nonprofit KABOOM! has identified the need for a further 12 new play areas to support even more children across Uvalde and is calling for support to raise the necessary funds. You can learn more about their work HERE.