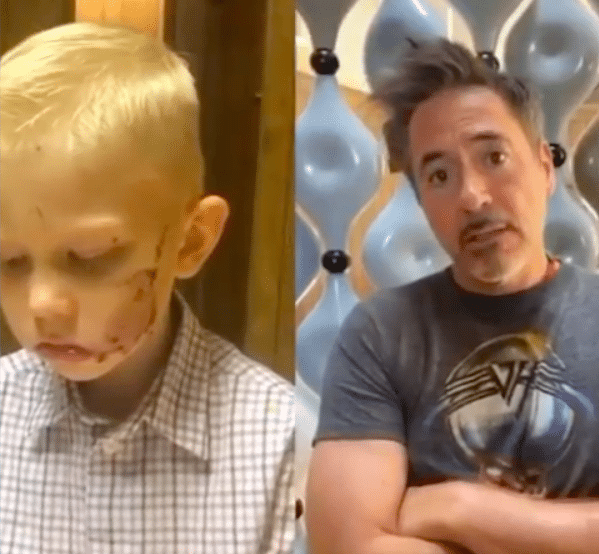 Well, it looks like Iron Man wants in on the kindness action too!

Recently, actor Chris Evans – aka Captain America – sent a shield to a “hero” 6-year-old boy who protected his younger sister from a dog attack.

Aww how cute is this?! @chrisevans sent a special message to 6-year-old “hero” Bridger, who bravely saved his little sister from a dog attack recently. (Video via @nicolenoelwalker)

According to a social media post by Bridger’s aunt, Nicole Walker, her nephew saved his sister’s life by “standing in between her and the charging dog.” He suffered multiple lacerations to his face and needed  around 90 stitches!

Now actor Robert Downey Jr. is praising the young boy for his heroic act and promising him “something special” for his bravery:

“Bridger you’re a rock star,” he begins in a video posted to Ms Walker’s page.

“I hear (Captain America) sent a shield your way. I’m gonna do one better. You call me on your next birthday. I got something special for ya.”

*Plays AC/DC to watch this video.* Thank you to @brandondavisbd for all his help in editing. EDIT: I guess I should mention that we just celebrated Bridger’s birthday not too long ago, so it will be a while before we find out what the surprise is.

Bridger also scored a message from the Hulk, Mark Ruffalo, which read:

“People who put the wellbeing of others in front of themselves are the most heroic and thoughtful people I know. I truly respect and admire your courage and heart. Real courage isn’t dominating people or fighting against people or walking around like a tough guy. Real courage is knowing what is right to do and doing it even when it might end up hurting you somehow. You are more of a man than many, many I have seen or known.”