Gigi Hadid has written an open letter addressed to the “paparazzi, press and fan accounts” in the hopes of being able to protect her baby girl from media attention she never asked for.

Much like Eva Mendes and Ryan Gosling, Cameron Diaz and Benji Madden, Kristen Bell and Dax Shepard and dozens of other Hollywood parents, the supermodel, who welcomed Khai with Zayn Malik in September last year, has purposely avoided sharing photos of her child’s face online. Instead she either blurs it out or covers it with an emoji of some sort.

In a letter posted in her Instagram stories, Gigi is hoping the press and the many fan accounts on social media will do the same:

“As our baby grows up, we have to realise that we can’t protect her from everything the way we wanted to and could when she was smaller,” Gigi begins.

“On our most recent visits to New York, she has started to want her sun shade lifted up (something she is used to at home) and helps herself to it! She doesn’t understand why she’s covered in the city, or what we’ve wanted to protect her form. I also want her to see the most amazing city int he world and the beautiful and diverse people that walk down the streets of NYC….that is, without the stress of the media circus that comes with parents who are public figures.”

Gigi continues to explain that some paps have respected her daughter’s privacy but it “comes down to the integrity of the photographer, publications, or fans sharing the images.”

She adds that both Zayn and herself wish that Khai will be able to “choose how to share herself with the world when she comes of age, and that she can live as normal of a childhood as possible, without worrying about a public image which she has not chosen.”

“It would mean the world to us, as we take our daughter to see and explore NYC and the world, if you would PLEASE PLEASE PLEASE blur her face out of the images, if and when she is caught on camera. I know it’s an extra effort – but as a new mom, I just want the best for my baby, as all parents do.”

Gigi explains that packs of photographers can be frightening for a child:

“I can imagine that close or dramatic paparazzi frenzies must be overwhelming and disorienting…it still is as an adult that understands and deals with it often.”

Gigi is not the first celebrity to request that the paparazzi and press be a little more considerate when it comes to children.

In 2013, a bill championed by Hollywood stars – and mums – Halle Berry and Jennifer Garner was signed into law in California which sees higher penalties for anyone attempting to record or photograph a child because of their parent or guardian’s employment in a manner that “seriously alarms, annoys, torments or terrorises” the child.

And in 2014, Dax Shepard wrote a piece for Huffpost about why children should be off limits to the paparazzi and began an online movement encouraging all of us to refuse to buy publications that show photos of famous people’s kids without their consent.

“The consumer is the only one who can put an end to this. They are the only ones with real power,” he wrote.

You can read Gigi’s full message below: 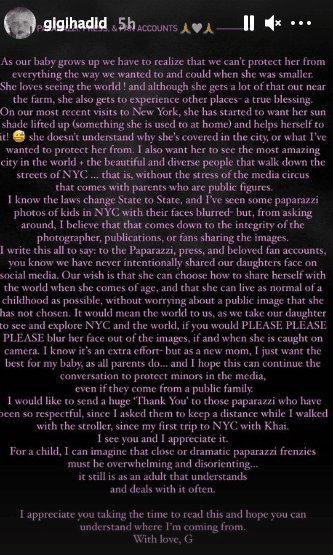 The Trailer For "The Kissing Booth 3" is Here!