The usual red carpet was swapped for an extensive black one inside Sydney’s iconic George Street Event Cinemas, on a frightful Tuesday evening for the Australian premiere of Halloween. The guest of honour? Jamie Lee Curtis. She’s the producer and lead in this long-time slasher series, and she has plenty to be proud of. As she says herself in a recent social media post, “it’s the biggest horror movie opening with a female lead. The biggest movie opening ever with a female lead over 55. Second biggest horror movie opening ever. ” I had the pleasure of asking Jamie a few questions – she was, as you’d expect, just fabulous: 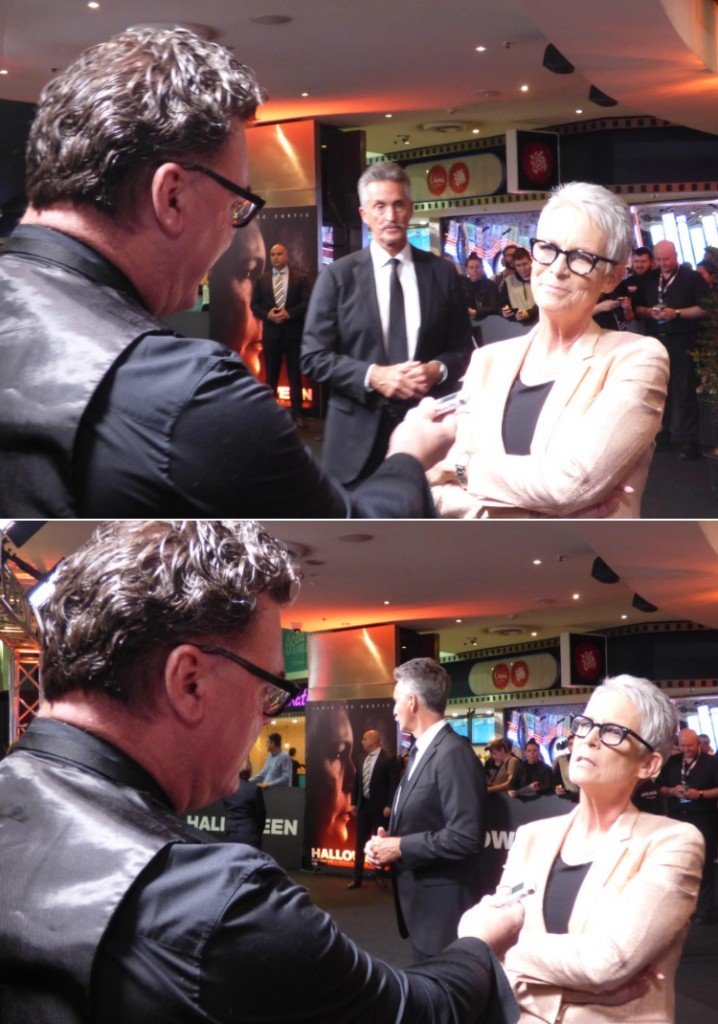 We have matching glasses!

You’re about to have a 60th birthday – congratulations – you’re on 20 years sober, you’re a producer and lead in an already number 1 box office film – how are you feeling right now?

Does your scream mature with age? Is it as easy to conjure as well as you did in the 1978 original?

JLC: You know, Laurie Strode doesn’t scream so much. She’s a warrior now. This is a different interpretation of women in the zone, taking charge for family. It’s very hard to remember 40 plus years ago on the original. It was a fast experience, you know, I still get excited by my work.

JLC: I’m happy you said that. While Andi Matichak who plays my granddaughter, looks exactly like my mothers twin sister. I had no decision in the casting but it was a triumphant decision!

Is there ever a time where you forgot about Laurie Strode or has she remained on your mind to revisit?

JLC: Oh, I have a lot of thoughts where Laurie Strode is not on my mind! (laughs) I am a card carrying adult woman in a country that’s going through turmoil so my thoughts are not to Laurie most of the time. Bringing her back to play was a collaboration of many talents especially the vision of David Gordon Green whom my godson Jake Gyllenhaal personally recommended.

Any advice you may give an aspiring actress going for a lead role?

JLC: It takes time for an industry to change as we are finding out. However, this industry is now getting together fast but we still have a long way to go. Our movie, I hope, is only one example for change to frequent female leads. You’re only as good as the part you get. Writing is an important component.

Halloween isn’t as huge in Australia. What can audiences expect here? Do they need to be educated in the original films or Michael Myers legacy?

JLC: One doesn’t need to know anything about anything! However, take someone you can squeeze really hard because it’s so scary!

Gabbi Bolt: Putting the Spotlight on Violence Against Women