On a steamy, hot afternoon at the glorious Sydney Botanic Gardens, a line of press and photographers wait for the arrival of Australian screen royalty, Nicole Kidman. Dressed in an elegant white suit, wearing sparkly heels, Nicole graces the red carpet, smiling and waving to an adoring crowd. She’s in town for the premiere of her new film Destroyer by Karyn Kusama, an independent, low-budget crime drama, full of action, suspense and trauma. Our Nicole is at the core, unrecognisable, with a dark, Golden Globe-nominated portrayal of burnt out cop, Erin Bell. It was twilight as Nicole made her way down the red carpet towards me for a brief chat, the glow of the evening sky like a halo around her. That smile. And a laugh as she greeted me. What can I say? She made my January.

Erin Bell is a complex character, was she a role that kept you up at night?

Nicole: I was so exhausted! It wasn’t that she kept me awake, it was more she depleted me. There’s a stamina required when doing this kind of filmmaking. It is tough in a sense you don’t have a lot of money, constantly on the fly, down in the trenches, gritty filmmaking.

How deep did you go into her mind?

Nicole: Playing something this powerful is tough. The same goes with Celeste in ‘Big Little Lies’ – it requires strength. There’s certain roles where, you really have to go there. I’m going to have to push myself to places I don’t necessarily want to go and places I have never been before then, existing in them. For me, it’s not so much a performance as it’s a state of being. 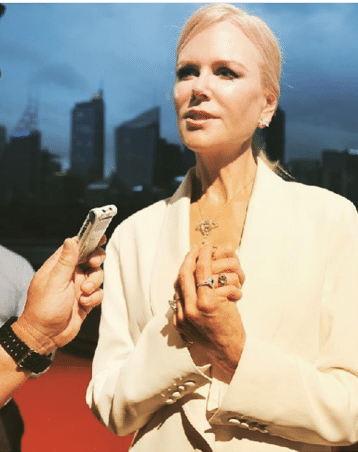 Nicole Kidman at the premiere of Destroyer, Sydney 2019.

The authentic L.A street locations must have been a challenge?

Nicole: Obviously, we didn’t have the funding to go build sets so yes, it helped me get into character for sure. When shooting on location like this, what you see is what you get! (laughs)

Technically the role would’ve probably been written for a male lead a few years ago, but you really nailed it!

Nicole: Thank you Shane, except this film became very much about a mother and a daughter. It’s about atonement. As much as people often say it’s a male-dominated genre, in terms of this character, I see it as deeply female. Strong feminine instincts. Because so many of the mistakes in her life has to do with her daughter and mothering. And it was exciting to have this opportunity to work with director Karyn Kusama.

DESTROYER is rated MA 15+ and will be out in Australian cinemas March 2019. 121 minutes, from Madman distribution.

How Boyz II Men Made This Doctor's Night, Twice!