There’s a short film Sir Richard Branson’s been facebooking, instagramming and tweeting about lately. It’s called Sides Of A Horn and it’s promising to open our eyes to the horrors of wildlife crime the way Blood Diamond (2007) opened our eyes to the illegal diamond trade. We had a chat to writer and director Toby Wosskow about why he felt compelled to make this film and how it all evolved from a Kickstarter campaign to being backed by the Virgin boss himself!

When L-A based filmmaker Toby Wosskow went on a holiday to South Africa a few years ago, he was struck by what he calls the “vicious beauty” of a white rhino and at the same time, devastated to learn they were being slaughtered to the brink of extinction for their horns. He spent months on the ground speaking with locals only to discover communities were being torn apart by a deadly poaching war no one seems to be talking about. So he teamed up with South African star and producer Emmanuel Castis and, he made a movie about it.

“While this film is scripted and fictional,” Wosskow explains,”there is not one thing in it – one storyline, one character, one line of dialogue that is not based on truth.” A truth that is extremely confronting. 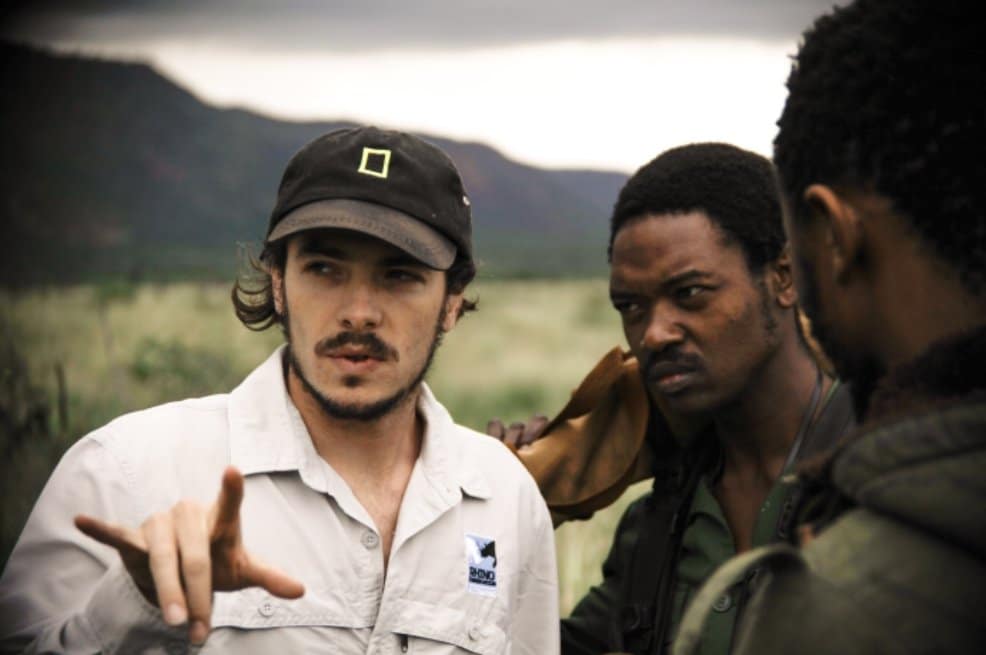 Poaching is now the fourth largest illegal industry in the world.  A single rhino horn can fetch up to US $300,000 on the Asian black market making it, by weight, worth more than gold and cocaine. The overseas demand for rhino horn has triggered a deadly war in South African communities where the animals are supposed to be protected. Rangers are finding themselves in frequent shootouts with poachers, while many poachers are simply locals living in crippling poverty who feel they have no choice but to survive on the illegal wildlife trade.

And as the human death toll keeps rising, the white rhino may no longer exist in the wild by the year 2023 – that’s only 4 years away.

“We can stop this war and save this species, but the first step is awareness,” it reads on the movie’s Kickstarter page. It’s this sense of urgency and Wosskow‘s hope in making a difference that makes it easy to see why over 230 people from around the world, including avid conservationist and humanitarian Sir Richard Branson have pledged their support.

Special times with our @sidesofahorn Executive Producer @richardbranson at the @neckercup in support of @virginunite and other extraordinary charities. This island has more animal species than almost any other island on earth, a testament to Sir Richard’s dedication to our planet.

“Through the Virgin Group, we were able to get the film in front of Sir Richard upon completion,” Wosskow explains. “Literally that same day, he watched and had an incredibly positive response. He immediately came on board as our Executive Producer and is helping us to get the film out to the world.”

Sir Richard Branson is not only spreading the word to his 15 million-plus followers on social media, but also raising awareness on his blog: “The rhino is one of Africa’s most precious assets,” he writes. “An animal that has hardly changed in 50 million years – a living, breathing time machine. I hope my grandchildren will be able to experience their fierce beauty, not talk about their sad (and wholly preventable) demise.”

This is the first time a movie is delving into both sides of the poaching war. Just as Blood Diamond (2007) instilled a consciousness in all of us about where our diamonds were coming from, Sides Of A Horn is promising to do the same about products made from rhino horn and the impacts of poaching on both animal and human.

Wosskow’s obviously hopeful for some kind of change but his expectations are completely realistic. The movie isn’t about finding an answer to the crisis, “it is to create a conversation,” he says. “I believe positive change can only begin with open dialogue, and in order to have open dialogue, you have to understand both sides of an issue.”

The short film has now been released internationally. You can watch it HERE and join the conversation online #sidesofahorn

This post was originally published 2 February, 2019 and has been re-posted today to include link to the movie.

Nicole Scherzinger Cleans Up Sea While Holidaying in Italy