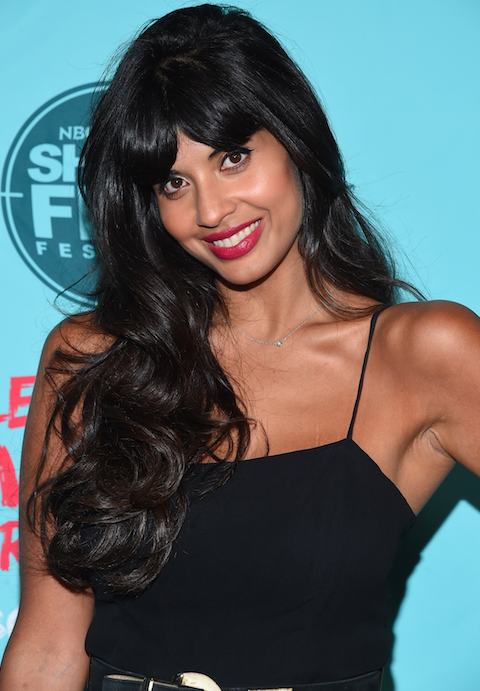 Actress, activist and feminist-in-progress Jameela Jamil commented on a tabloid article about herself and Meghan Markle today – and you know what ladies, gentlemen and non-binary friends?

The headline claimed they were best friends quarantining together but as Jameela explained in a Tweet: “I’ve met this woman once ever!”

And just like that, the article disappeared! Gone. Goodbye. Never even existed.

Not only did she catch them out in a blatant lie, but she also used the moment to show us just how ridiculous, calculated and ruthless the tabloids really are:

“Since the first time I spoke out against the UK (mostly tabloid) media over their racist behaviour towards her, I’ve been subjected to press harassment, my family started being harassed and offered money for dirt on me within a week of my first tweet in defense of her,” she writes on Instagram.

“What has followed has been a plethora of lies and rumours about me, set up to discredit me as an individual and convince people I am “crazy” to devalue my opinion to anyone who may realize I am right.”

She continues by explaining the tabloids are “hyperbolizing” her relationship with the Duchess to create a specific narrative that she is “saying these things out of loyalty rather than because it’s right to call out misogyny and racism.”

She warns her 3.3 million Insta following to be mindful of what they read – and believe.

It reminds me of the time Russell Crowe was forced to clarify that he was in fact not planning a shock wedding with Terri Irwin. 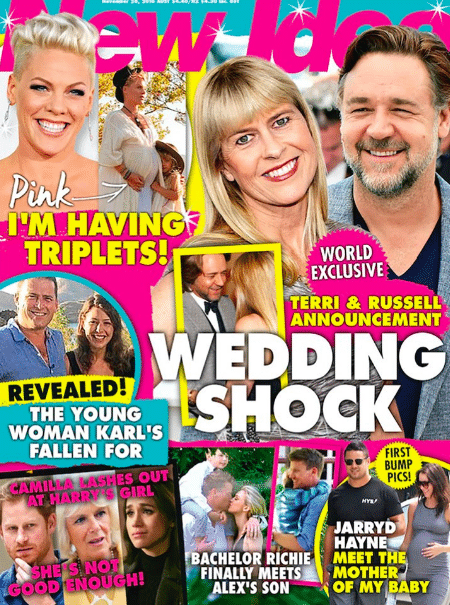 “I have such a dramatic life in bs magazines,” he posted on his socials.

FYI, around the same time he was “SO IN LOVE” with Aussie media personality Fifi Box. And “TOGETHER AT LAST” with Delta Goodrem.

And there was that time Sarah Jessica Parker called out a publication  for fabricating a “screaming match” between her and husband Matthew Broderick:

“Hey National Enquirer and your sister publications, why not celebrate a marriage of 22 years and relationship of 27 years? Because, despite your endless harassment and wasted ink, we are nearing 3 decades of love, commitment, respect, family and home. There’s your ‘scoop’. From a ‘reliable source.’”

And the time George Clooney held a certain tabloid accountable for not only falsely claiming Amal’s mum didn’t want them to get married for religious reasons, but also that her religious traditions can call for the death of the bride. He spoke up because these were harmful words seriously impacting the people he loves:

“The irresponsibility, in this day and age, to exploit religious differences where none exist, is at the very least negligent and more appropriately dangerous.”

And the time Marion Cotillard was forced to release a statement denying she was the reason Brad Pitt and Angelina Jolie split up because the false reports were ripping her own family apart:

“I am not used to commenting on things like this nor taking them seriously but as this situation is spiralling and affecting people I love, I have to speak up.”

And let’s not forget The Duke and Duchess of Sussex who are taking legal action against the Mail on Sunday:

“I have been a silent witness to her private suffering for too long,” Prince Harry said in a statement, referring to the impact of the tabloids on Duchess Meghan.

“I’ve seen what happens when someone I love is commoditised to the point that they are no longer treated or seen as a real person,” he continues. “I lost my mother and now I watch my wife falling victim to the same powerful forces.”

The tabloids have been pulled up by celebrities so many times. Yet they’re all still here – minus News of the World – doing what they do best.

We talk so much about the toxicity of tabloid culture, yet we’re buying a copy of New Idea every 3 seconds. And 2.6 million people are clicking onto their site every month.

The whole industry is thriving. But it doesn’t have to.

So here’s what we need to do:

1. THINK TWICE ABOUT THE MAGAZINE YOU’RE THROWING YOUR MONEY AT:

Every time we buy these publications, we are telling them this is what we want to read. So they print more.

And as long as we keep going back for more, major companies continue advertising with them, keeping them afloat.

But if we’re armed with the knowledge that these same publications are full of “fantasy rubbish” (as Johanna Griggs says) and that they’re causing people to suffer in ways that we might not understand, isn’t it time to find the pleasure that we seek from these tabloids and gossip mags elsewhere?

Can we access those red carpet photos in more reputable publications? Can we have our moment of escapism with a magazine that isn’t directly impacting the mental health of the people they write about?

Next time you want to buy a mag at the supermarket, take a moment to think, do I really want to support this culture? Is there an alternative I can read instead?

Same deal. Every time we click, we increase that publication’s reach and that means more advertising dollars to keep them in business.

I know, I know, there’s always that one headline that is just so great, it’s impossible to resist. Oh I’ll just take a quick look and see if her cellulite really is that bad.

Again ask yourself, is this the culture I really want to support?

Sometimes the headlines are so blatantly ridiculous, we want to share them with our friends and Facebook groups, just for a laugh. Can you believe what they’ve written about Miley today?

When you share it, you’re not only increasing engagement with that particular article helping to boost its visibility in other people’s feeds, but you’re also adding to their eyeball count.

4. FIND OUT IF YOUR CAFE, HAIRDRESSER, MEDICAL CENTRE SUBSCRIBES TO THESE MAGS:

And encourage them to swap to more reputable publications!

All it takes is an email, a phone call or a quick chat.

And if you’re really dedicated to the cause, you could even buy some magazines yourself and leave them in the waiting room.

5. LOOK FOR THE PUBLICATIONS THE CELEBRITIES THEMSELVES SUPPORT:

Quite often celebrities will do interviews and post the link on their socials. These are the articles you want to read.

Not the ones with the blurry photos…

Taken with a long lens camera…

By a random hiding in a bush.

We’re so good at complaining about the toxic tabloids. We’re not so good at boosting the meaningful stories. The ones with impact. The ones that recognise people for their achievements, their hearts or their skill.

Let’s start actively sharing the types of stories we want to see more of.

As Jameela Jamil once said herself, “we control the market. The market does not control us.”

So let’s start controlling it. Who’s in?