Emily Ratajkowski is speaking out against people who shame mums on the internet – and her message is an important one because we can never possibly know what a mother may be going through.

The model, author, entrepreneur and women’s rights advocate who’s been on the receiving end herself from both strangers and members of the media since giving birth earlier this year, took to her Instagram stories to point out that no one should be attacked in this way online and to highlight the cycle of shaming we, as a society, tend to call out but also perpetuate:

“We are reflecting back on shaming Britney and calling her a bad mom when she drove with her baby in her lap,” Emily begins, referring to a 2006 photo of Britney Spears which depicted her as a negligent mum, but when given context showed her protecting her baby from a frightening paparazzi experience. This was highlighted in the recent New York Times documentary Framing Britney Spears and has lead to huge public discussion about how the media and the public could’ve treated her better.

“We talk about how we have to ‘do better’ as a culture,” Emily continues, “Meanwhile my comments are filled with awful remarks about how I don’t deserve to be a mom.” 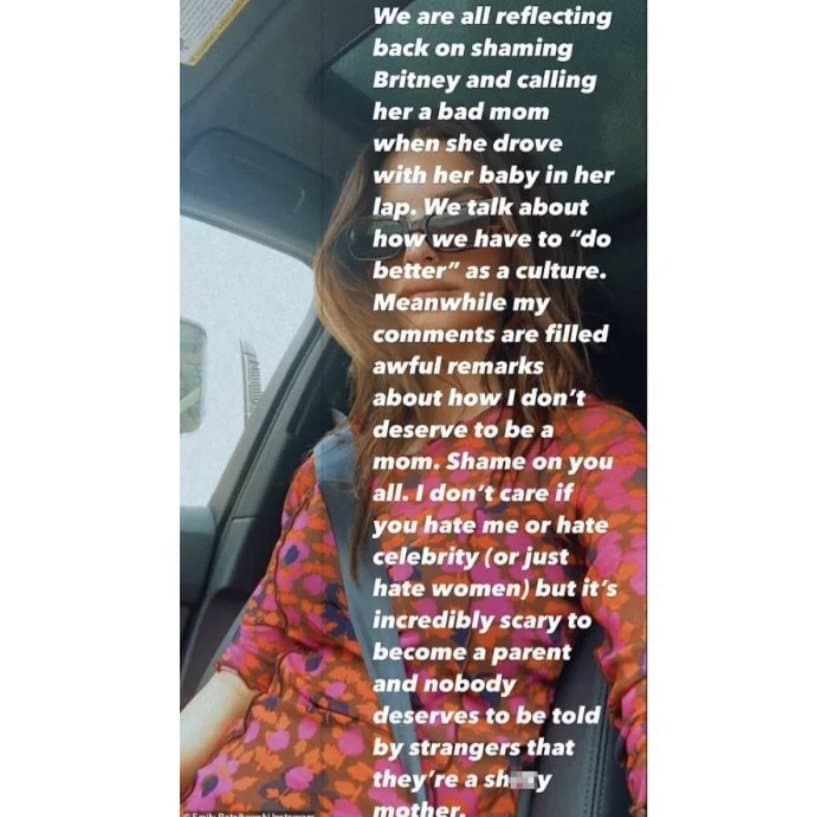 Many of the comments she’s been receiving, which I won’t be sharing here, stemmed from a now-deleted photo of her holding her baby with one arm.

“Shame on you all. I don’t care if you hate me or hate celebrity (or hate women) but it’s incredibly scary to become a parent and nobody deserves to be told by strangers that they’re a sh**y mother.”

Emily is obviously not the first famous mum to be shamed online.

It happens. A lot.

Like that time Meghan, The Duchess of Sussex was shamed for the way she was holding her baby – awkwardly, according to the tabloids.

Or that time Jenna Dewan was ridiculed for posting a photo of herself in lingerie because “apparently, when you become a mother, you’re supposed to leave your sexuality at the door,”she told Women’s Health magazine.

Or that time Alyssa Milano was torn down for sharing a photo of herself breast-feeding:

“I got really sad about it,” she told The Talk. “Who are we, that now we get upset as human beings if we see a woman feeding her baby?”

Or that time Pink, who was so sick of being constantly mum-shamed, jokingly shamed herself while sharing a photo of her kids:

“Here’s a picture of my child running through water. It wasn’t even filtered. What a waste of water. And no helmet? I hope she had sunscreen. If she slips and falls she may be traumatised for life. And her mother wasn’t even there. I was….gasp…working!!!! In another country!”

She added some rude finger emojis and the hashtag #F***TheParentingPolice, which says it all really.

But hey, you don’t have even have to be famous to cop the mum-shaming either.

A 2017 survey of mothers of children aged 0 – 5, revealed that 61 percent have been mum-shamed at some point whether it’s by strangers online or by friends and family. Nearly half of those say the shaming caused them to question their parenting abilities and choices.

And if you read what Emily had to say again, you can almost hear the pain in her words: “it’s incredibly scary to become a parent and nobody deserves to be told by strangers that they’re a sh**y mother.”

Her words are an important reminder that being a parent is hard enough! But also, that there is an impact to this shaming – just like we saw with Britney – even though we may not realise it in the moment.

Studies show the pressure of being a perfect mother in this social media age is already breeding unimaginable pain. Add to that the mum-shamers and we see serious consequences on maternal mental health. From feeling less than or useless or incapable to experiencing depression and anxiety. And if the mother is already experiencing postpartum depression, the impact can be much more severe.

At this point, there may be some who say they have genuine concerns for the way Emily was holding her baby with one arm. But since when does genuine concern involve LEAVING A SWEARY COMMENT IN CAPS LOCK AS IF YOU’RE YELLING IN HER FACE?

Since when does genuine concern involve telling someone they’re a sh**y mother? A failure? Hopeless? Useless? Brainless? Can’t do anything right?

The truth is that if any one of us saw Emily in real life that day, holding her baby as she was, we would not have gone up to her screaming in her face about how she’s the worst mother in the world. So why does it happen online?

Emily’s words are an important reminder that there’s no such as thing as the perfect mum or the perfect way to parent.

That there’s no one-way to do any of this.

That we’re all human.

And that the words we leave online matter.

Blake Lively Tells "Real Story" Behind Tabloid Photos of Her Kids, But She Shouldn't Have To