It’s Melbourne Cup Day and while it feels like just about every Aussie celebrity, socialite and social media star is at some sort of Cup Day event (no doubt your Insta feed is being bombarded with pics of glamorous women and ridiculously well-groomed men too) there are more than a few who are saying #nuptothecup instead.

The reason? Animal cruelty. A recent study revealed that 119 horses were killed on Australian racetracks over the last ‘racing year’ – 16 collapsed and died, 11 died from cardiac causes, some suffered injuries including broken necks and ruptured aortas.

Make that 120 by the way. The Cliffsofmoher who suffered a fractured right shoulder during today’s race had to be euthanised soon after.

And what’s worse, The Cliffsofmoher and the 119 others are just the ones we know of. In some Australian states there is no requirement to record the deaths of horses if they happen during training or in trials.

David Campbell is one of many saying #nuptothecup today. He’s gone for a run through Sydney instead because he “doesn’t agree with the exploitation of animals.”

Today I decided to run my own race and say #nuptothecup I don’t agree with the exploitation of animals on this day. So the nation stops but I run on.

Married At First Sight’s Dean Wells also ditched the cup today. In a video posted to Insta he says, “here’s my take on Melbourne Cup – I don’t do it. I stay away. I don’t support those industries. I don’t like horse racing. I don’t like greyhound racing. Those industries should be banned.” He continues to explain why he thinks horse racing is “archaic, pointless and cruel” and urges his fans to bet on something else like soccer instead.

Fashion designer Alannah Hill says she understands “it’s a billion dollar industry” and “a smashing chance to dress up”  but she doesn’t agree with the way the horses are treated:

Loves! I just can’t do it…! I can’t! I was once a nervous over dressed cocky little big thing at the highlight of the year – The Melbourne Spring Racing Carny! You would hear me cantering here, cantering there – trotting here – trotting there – but I rarely saw a horse. I was the Judging Mistress on Fashions on the Field – and ONCE, even a roving reporter for Channel 7! (That didn’t work out so well when my temporary crown (tooth) flew into an attractive CEO’s lap. FLEW! Into his LAP! Mid interview!) I was trackside in 2013 – the 1009 Bobby Pins holding an actual vintage lampshade on my apple sized head. I could hear the thundering roar of one of the most beautiful animals in the world – a horse. Look into the eyes of a happy horse and you’ll feel true peace my loves. I stared into the eyes of a beautiful stampeding horse – he was being whipped, his tiny colt ankles waiting to snap – his flared nostrils bloodied. I didn’t see any peace. I saw nothing but fear. I understand it’s a billion dollar industry – a smashing chance to dress up and be in pain ALL DAY! We know what happens to these God given creatures when they fall – when they stumble – their baby bones unable to heal- they’re of no more use and yet their pain continues…we must find a way to NOT stop the industry, but to somehow take care of our defenceless giant souls – the horse. Love Alannah ❌#therealalannahhill #reinvention #helpthehorses

Model and animal rights activist Imogen Anthony didn’t just say #nuptothecup….she’s giving it and everyone who supports it the finger:

I’m sorry, I’m taking a stand ~ The Melbourne Cup is not fun ~ it’s disgusting ~ it shows that our country IS only 200 years old and we are fresh off the barbarian boat… if your day of drinking and wearing a fascinator is worth more (which most of you do) when I am PERSONALLY rescuing dozens of whipped, an abused horses. And now, I am taking this as a direct insult. These horses were loved for a while and then thrown away when they couldn’t provide the owner with what they required. This is a true show of how insecure we are as a human race. It shows how much we have no regard for life in general. Another living thing’s LIFE. Not even to eat, not even to survive, purely just to run for your viewing pleasure and win back a fifty buck bet… fuck your fascinators, they don’t even look good and y’all pick on me for my crazy looks all the time (at least I can do it without watching horses die) so sucked in o clock. Fuck your spring racing carnival looks, fuck all of it. Fuck the cup. FIND SOMETHING ELSE!! It’s actually so fucking stupid. And you think I look stupid in what I wear sometimes???? HA – please… ~ ? #FUCKTHECUP #FUCKTHECUP #FUCKTHECUP ~ **Maybe we should start #FUCKTHECUP events all over the country on Melbourne Cup day?? ??? You saw it here first, don’t steal my ideas or I’ll find you…

Actress and director Simone Buchanan is raising awareness about the cruelty of horse racing, posting this image from non-profit organisation, Coalition For The Protection of Race Horses:

#Repost @animalsaustralia ?? Our friends at @horseracingkills have revealed that 119 horses were killed on Australian racetracks over the last ‘racing year’. ? 9 were killed in October 2018 alone ?16 collapsed and died ? 11 died from cardiac causes ? 4 died from bleeds. ? Injuries include broken neck, broken pelvis, ruptured aorta, broken humerus. Others simple categorised as ‘serious racing industry’ ? These are just the recorded numbers. In most Australian states there is no requirement for deaths to be recorded if they happen in training or in trials. Animals and gambling money are a toxic mix. Love horses — not racing. #LoveHorsesNotRacing #HorseRacingKills #Gambling #MelbourneCup #SpringCarnival #SpringRacing

Model Sophia Barrett says “the horses live such miserable lives beaten into submission for human entertainment.” She’s urging her followers to think twice about what they’re “supporting, sponsoring and upholding.”

If you’re planning on wearing a beautiful outfit, a fancy hat, placing bets and day drinking with your friends this spring racing season, please consider what you’re supporting, sponsoring and upholding. You can do all those things with your group at a picnic, a poker game or a bar. There is nothing glamorous about horse racing. The horses live such miserable lives, beaten into submission for human entertainment. A Melbourne University study found that post race 50% of racehorses have blood in their windpipe and 90% have blood deeper in their lungs. In the last year alone, 116 horses were killed on Australian racecourses. 3 died from the Melbourne Cup. An estimated 18,000 were sent to slaughter for being too slow. Countless shattered limbs, clotted lungs, broken teeth, bloody noses and torn oesophagus’. All for our fun and funds. This racing season, get your group together, dress up, have champagne at your friend’s house and actively remove yourself from the cruelty that is horse racing. Head to www.horseracingkills.com for more information if you want! #horseracingkills #nuptothecup

It’s a dark day in Melbourne, and the rains have clearly washed up piles of trash at the racecourse – what’s the bet that they’ll think the weather and not the death of a horse for entertainment was the worst part of today?

And then there’s Annie Nolan of UncannieAnnie.com.au fame who summed up her thoughts in an Insta story: 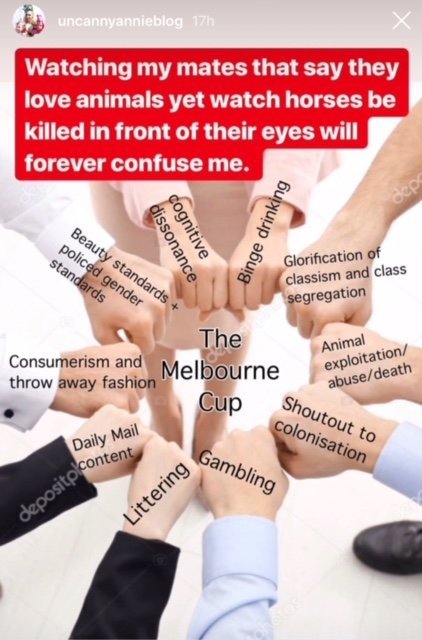 What do you think of the Melbourne Cup and horse racing in general?

Why We All Need a Bit of Busy In Our Lives