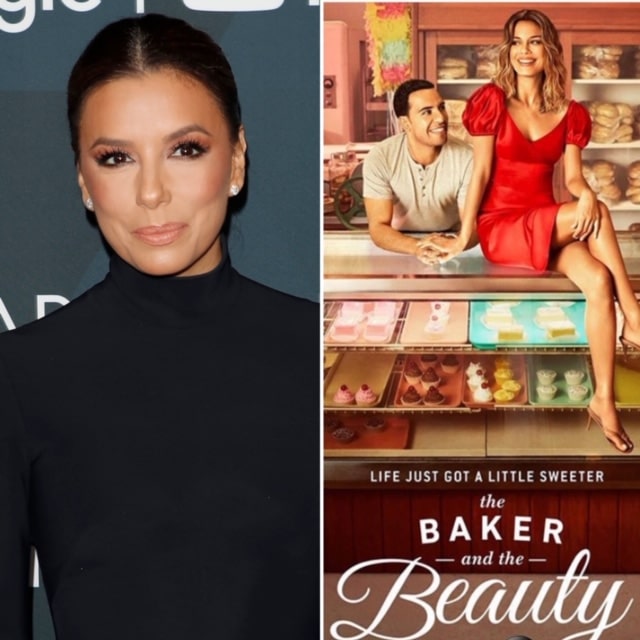 Photo of Eva Longoria by Kathy Hutchins /Shutterstock.com; The Baker and the Beauty/ABC Network

Someone, somewhere in TV executive land made the decision to axe The Baker and The Beauty on the ABC Network after just one season – and well, what on earth were they thinking?

The romantic dramedy is adapated from an Israeli production and stars Australian-Peruvian actress Nathalie Kelley, and the most charming, charismatic Latinx cast including Lisa Vidal, Victor Rasuk and David Del Rio.

It’s a beautiful. heart-warming series about a working class baker and a glamorous model with her own business empire whose worlds collide when they fall in love.

But it’s also about the power of family. And believing in yourself. And food – lots of mouth-watering Latino food.

A strong connection, but will it be enough? ❤️ The season finale of #TheBakerAndTheBeauty starts TOMORROW at 9|8c!

Within hours of the show being axed, not only did an online petition appear urging other streaming channels to pick up the show, but also some of the biggest Latinx actors and actresses in Hollywood began calling for a second season.

“Representation matters on television!” Eva Longoria writes on social media. “This was a sweet show about a good family! And one of the only Latino shows out there!”

Well I’m sure you heard that @abcnetwork cancelled @bakerandthebeauty yet another show with an entire Latino cast! This is bad news for the Latino community! Why doesn’t @abcnetwork give it more of a chance for our gente to find the show?! And “gente” where are you guys? Show up and get loud. Representation matters on television! This was a sweet show about a good family! And one of the only Latino shows out there! We need this show to find another home! Show your support with the hashtags below and let’s flex our community power! ✊🏽✊🏽✊🏽. #Repost @thereallisavidal ・・・ Hey peeps! Hoping everyone is doing well staying healthy and safe as most of you know ABC decided to cancel our show the Baker and the Beauty, sad… but the good news is that it isnt over yet, we are still hopeful and NBC Universal is shopping or show to other platforms such as #peacocktv , #netflix , #Amazon , #Prime etc… There are over 500 television shows on air, and ZERO latino shows on network TV right now, and only a handful on streaming. The Baker and the beauty is a well written diverse show about a Latin family preppers denting our Latino culture in a positive light. It pretty much is for every family to watch. It would be tragic if this show just disappears at a time when the diversity issue in our country is front and center. When the lack of inclusion is at an all time high as well. We have two weeks to find a new home for our beautiful show the Baker and the Beauty…. please help support us and bring attention in anyway you can to help us save our show… we love you guys and we are grateful for you! 🙏🏽💪🏽💋👊🏽😘 Please use these hashtags #savethebakerandthebeauty #renewthebakerandthebeauty

It was the only Latino show on mainstream American television.

According to Lisa Vidal who plays strong-minded, loving mum Mari Garcia on the show, “there are over 500 television shows on air and ZERO latino shows on network TV right now, and only a handful on streaming.” (Think Jane the Virgin and Queen of the South.)

Actor JW Cortés described the cancellation of the show as “heartbreaking.”

“ABC has cancelled the ONLY LATINO SHOW on prime time TV,” he writes in a Tweet urging NBC Universal to consider picking up the program. “Our stories are worth telling!” 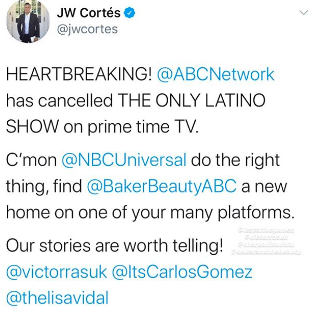 Actress Alex Meneses has also weighed into the conversation:

“Latinos comprise 20% of the population here in the U.S but only 3% on television,” she writes on Instagram. “We all need representation.”

Actor Amaury Nolasco says “we need shows like this one. About a good Latino.”

Meanwhile actress Zoe Saldana is also supporting calls for a second season: “We were all watching the show! And when I say WE, I mean we Americans of Latinx Blood.”

In one delightful binge-fest.

And quite frankly, I can’t wait to find out what happens to Noa Hamilton and Daniel Garcia next.