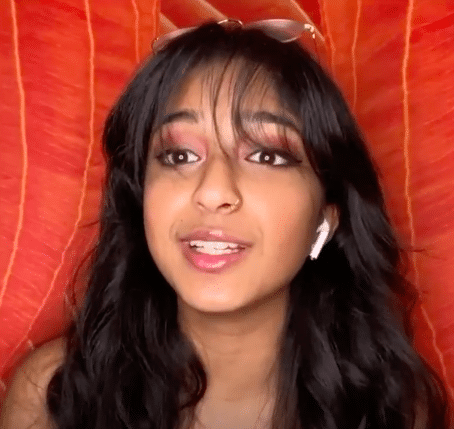 Maitreyi Ramakrishnan announces Season 2 of “Never Have I Ever” (Photo: Netflix)

Teen comedy Never Have I Ever by Mindy Kaling and Lang Fisher is coming back for a second season!

The Netflix series starring Maitreyi Ramakrishnan, Poorna Jagannathan and Richa Moorjani will return for 10 episodes – and the cast is pretty stoked about it.

They reunited on a Zoom call for the good news…and were a little distracted by Maitreyi’s new bangs:

NEVER HAVE I EVER: SEASON 2, LET’S GO!!!! oh and @maitreyiramakrishnan got bangs!!!!

“Maitreyi, what’d you do to your hair?” asks co-star Jaren Lewison who plays Ben on the show.

“She got bangs!” says Lee Rodriguez, who stars as BFF Fabiola.

“It seems crazy to get us together to talk about your bangs,” Jaren continues before Maitreyi interrupts with the great news about a second season:

“It’s not about the bangs! I just wanted to tell you guys that Never Have I Ever is being renewed for a Season 2!”

“Wow, that is much better news than you getting bangs,” jokes Darren Barnet who stars as love interest Paxton.

We are so excited for a second season of #NeverHaveIEver! It’s all because you guys turned up to watch it and told your friends – it’s that simple! Thank you so much. And THANK YOU to our partners at @Netflix! ❤️🙌🏾❤️

The show which follows the life of first generation Indian American teen Devi and her “brown girl” problems, has been hailed a win for representation with women and girls of colour dominating the screen.

To everyone who gave our show a chance and for all of the overwhelming love we have received from around the world – it’s because of YOU that we get to do this again. Shows like this, that are culturally specific, nuanced and led by an unconventional looking lead cast with names longer than song lyrics, usually don’t even get to make it past the script stage, let alone make it to the #1 spot on @Netflix globally. This just shows how much #representationmatters and how much more work we all still have to do to make space for more unheard voices. I will personally be going into season 2 (and everything else I do) with a renewed sense of responsibility and motivation to lead with authenticity and help shed a light on marginalized voices, within the very diverse South Asian community and beyond. Believe me, I am listening to every word being said about the show, and I take it seriously. 💕🙏🏽 lastly, this would have never happened without the courage, talent and sheer brilliance of our incredible show creators and queens 👑 @loulielang and @mindykaling thank you from the bottom of my heart for everything ❤️ @neverhaveiever #season2 😱🤩

“Shows like this, that are culturally specific, nuanced and led by an unconventional looking lead cast with names longer than song lyrics, usually don’t even get to make it past the script stage, let alone make it to the #1 spot on Netflix globally,” actress Richa Moorjani who plays cousin Kamala on the show, says in a social media post.

“This just shows how much representation matters and how much more work we all still have to do to make space for more unheard voices,” she adds.