Have you come across the hashtag #IAmNotOk? Please know that it deals with horrific stories of domestic violence, self-harm and suicide. If you or anyone you know may need help, please contact Lifeline in Australia, or a support helpline in your country. Violence and sexual assault is not acceptable. It is not your fault. There is help out there. And if you are the perpetrator, you can change your behaviour by seeking help too.

Westworld actress Evan Rachel Wood says she can’t “remember what it feels like not to be scared.”

Game of Thrones’ Esmé Bianco says years after it ended, she still suffers from “PTSD and anxiety.”

The it they speak of is domestic violence. They are both survivors sharing heartbreaking stories of the psychological trauma they still live with, years after leaving their violent partners.

#IAmNotOk is a movement allowing people to share their experiences so others won’t feel alone. So they know that it’s ok to not be ok and there is help out there. And much like #MeToo, it’s opening our eyes to just how widespread the issue is.

In a video posted to Insta, Evan tearfully explains,“I’m not ok because no matter how much work I do, I’m still searching for some sort of peace and I’m searching to feel safe….I’m still trying to put all this behind me but I don’t know if I’ll ever be fully able to do that.”

She also shared images from a Gucci photo shoot in 2010 – photos that you and I would look at and not think twice about. But when Evan looks at them, it revives memories of feeling weakened by her abusive partner.

“I was emaciated, severely depressed and could barely stand.” she writes. “I fell into a pool of tears and was sent home for the day.”

The day of this photoshoot, I was so weakened by an abusive relationship. I was emaciated, severely depressed, and could barely stand. I fell into a pool of tears and was sent home for the day. #IAmNotOk

Evan also opens up about how two years into her violent relationship, she felt so desperate to stop the abuse yet too scared to leave, that she resorted to self-harm. I have not reposted the accompanying image on this page as I find it too confronting. However, it’s important to realise that self-harm was not the solution. Evan explains, “It only made the abuse stop temporarily.”

Actress Esmé Bianco has added her voice to the discussion too. In her Insta post showing a photo of her back with whip marks on them, she says, “I used to look at this photo with pride because I thought it was a sign of great devotion to my abuser. Now I look at it with horror.” 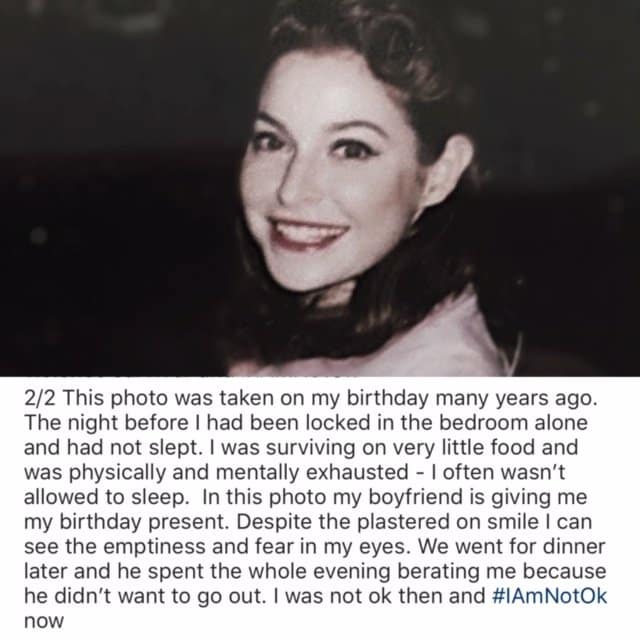 Esmé is taking medication now to deal with her PTSD and anxiety stemming from the abuse:

#IAmNotOk because I have to take multiple medications a day to treat my PTSD and anxiety, stemming from a #domesticviolence relationship I left years ago. I consider myself extremely fortunate that I can afford good medical care and therapy. Many survivors aren’t that lucky @iamnotokmvmt

Evan and Esmé’s stories are sadly not rare. Every day women (and men) are experiencing violence at the hands of an intimate partner. In Australia, it’s 1 in 3 women and 1 in 5 men.

By speaking out, Evan, Esmé and all those sharing their #IAmNotOk stories are not only raising awareness about how domestic violence can affect anyone, but also tearing down misconceptions about why people can’t “just leave”  the relationship. It’s letting people know they are not alone and it’s giving those same people a network of support.

The One Thing We Didn't Know About Luke Perry