Earlier this year, Game of Thrones actress and mum Sophie Turner shared a blunt message to the paparazzi to stop photographing her daughter: “It’s f***ing creepy that grown, old men are taking pictures of a baby without permission.”

A few weeks later, supermodel and new mum Gigi Hadid shared an open letter to the media asking them to, at the very least, blur out photos of her daughter: “I can imagine that close or dramatic paparazzi frenzies must be overwhelming and disorienting…it still is as an adult that understands and deals with it often.”

Today, it’s Hollywood star Blake Lively who’s seeing her children’s faces plastered all over a tabloid without her consent. Interestingly, the photo is next to one of her smiling and waving, making it look as though she’s totally okay with it all. (I won’t share the tabloid or a link to it here. More on my reasoning below.)

But in a comment on Instagram, she decided to share “the real story” explaining that the pics were taken after her kids “were being stalked by men all day. Jumping out. And then hiding.”

“Where is your morality here? I would like to know. Or do you simply not care about the safety of children?” she asks the tabloid before urging them to “get with the times.”

And she’s right. The tabloids need to get with the times.

Blake should not have to be spelling any of this out because, well, isn’t it obvious? 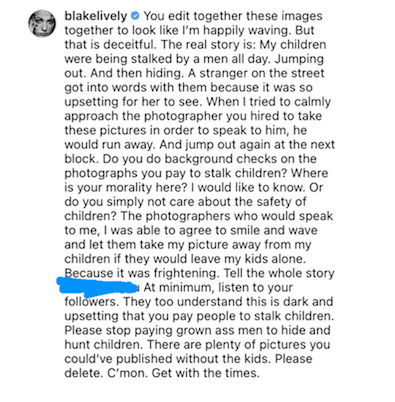 Much like Kristen Bell and Dax Shepard, Eva Mendes and Ryan Gosling, Cameron Diaz and Benji Madden, Mindy Kaling and so many more, Sophie Turner, Gigi Hadid and Blake Lively have all made a huge point of not posting any photos of their kids online which identify them. They’ll either blur out their faces, post an emoji over them or crop the pics.

There is not a tabloid “journalist” or “editor” in this world who can say they don’t know which celebrities are purposely maintaining their children’s privacy, because it’s literally right there on the celebrities’ social media pages, for all of us to see.

So when a tabloid goes “let’s publish the pics” knowing this very fact, isn’t it just plain wrong?

It’s a conversation we’ve had over and over again and every time, the answer is stunningly clear. 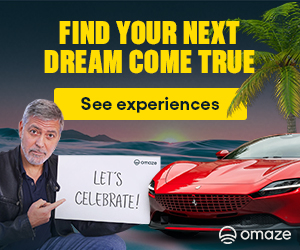 We had it in 2013, when a bill championed by Hollywood stars – and mums – Halle Berry and Jennifer Garner was signed into law in California which has lead to higher penalties for anyone attempting to record or photograph a child because of their parent or guardian’s employment in a manner that “seriously alarms, annoys, torments or terrorises” the child.

“We’re moms here who are just trying to protect our children. These are little innocent children who didn’t ask to be celebrities. They didn’t ask to be thrown into this game and they don’t have the wherewithal to process what’s happening. We don’t have a law in place to protect them from this,” Halle said in her testimony at the time.

Jennifer Garner also spoke out highlighting other problematic aspects of paparazzi culture, because sometimes, it’s not even about the actual photo:

“There are violent, mentally-ill stalkers who can now get close to my kids by simply following mobs of photographers and blending in. Like the very man who threatened to cut the babies out of my belly. Who was arrested waiting behind our daughter’s preschool, standing among the throng of paparazzi.”

He began an online movement encouraging all of us to refuse to buy publications that show photos of famous people’s kids without their consent, because “the consumer is the only one who can put an end to this. They are the only ones with real power.”

A number of celebrity publications from People to Entertainment Tonight and even gossip site Just Jared agreed to the “no kids policy” and have stuck with it.

We’ve had the conversation time and time again, each time moving closer to the understanding that just because you can, doesn’t mean you should take those photos and publish them.

So in 2021, when there are laws specifically addressing the protection of minors from terrifying paparazzi encounters, and there are general courtesies in place for publications to use common sense and decency when it comes to publishing their photos, and the consumer is becoming more conscious about which publications to throw their money at and which ones support a damaging tabloid culture, and all signs are pointing to the fact that, no, it is not okay to take or publish these photos of kids, why is Blake Lively still having to tell the paparazzi and the tabloids to leave her babies alone?

Here’s where we need to talk about social media, and the role we all play in paving a path for the tabloids to push the boundaries.

It’s the very reason why I’m not sharing the original post that Blake commented on, only her comment with the tabloid’s name scribbled out, because I don’t want to drive any more traffic to that original post – but I can tell you that it has amassed thousands of comments, many telling the tabloid what they’re doing is wrong.

You see, that’s exactly what the tabloid wants. Positive or negative, any comment will do. In fact, they thrive on our outrage.

And the more clicks they have, the higher their readership tallies. Which is what keeps them afloat with advertisers.

Blake’s right, it’s time for the tabloids to get with the times.

But it’s also time for us all to think twice before we comment on or share something online. It’s time we think twice about the impact of how we go about sharing that piece of information – because in that split second we may think we are helping the situation? We’re not.

Why Emily Ratajkowski's Message About Experiencing Mum-Shaming is So Important

Oh. My. 𝘎𝘢𝘨𝘢. ⁣ The full trailer is

I was going to write an article summarising all th

So Britain’s @tomdaley took part in his fourth O

Pretty awesome, huh? While some of the medals at t

Despite what the tabloids may be telling you, @par

The first EVER gold medal for the Philippines! In